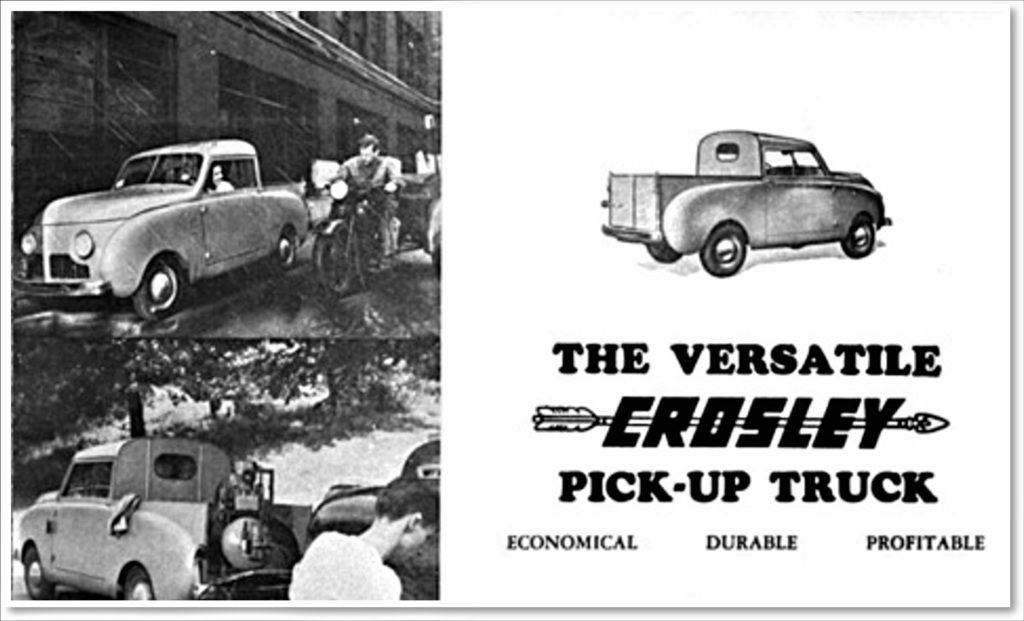 Characteristic of the post-WWII economy, this quarter-ton pickup was minimalistic and smaller than most trucks in the early ’40s or ’30s. Designed with a pickup in mind, but placed on a sedan body, it resulted from Powel Crosley’s determination to create a line of affordable and small (economy) vehicles. The CoBra (copper-braised; aka “The Mighty Tin”) engine produced a massive 26 horsepower from its 44-CID 4-cylinder.

In 1947, Powel Crosley of the Crosley Corporation brought back the pickup truck based on his Crosley sedan body, but with his famous CoBra engine installed. His new CC pickup became the first mass-market single-overhead-cam engine in 1946. It also became the first slab-sided postwar car and the first all-steel-bodied wagon—and it only cost $1,007 when new.

About this Crosley CC pickup . . .

*The information in this document is largely provided by The Standard Catalog of American Cars and The Makes That Didn’t Make It. The full citation is listed below with where to find this information and more.

This particular Crosley is restored with a silver exterior and gray interior. It has undergone a clean restoration, returning it to a near-original state. It’s also been converted to a push-button start, and it is displayed with a snap-on tonneau cover for the bed and oak rails lining the edge.

Crosley made cars sporadically from 1939 to 1952, introducing many new ideas in the process. He also owned the Crosley Broadcasting Corporation of Cincinnati, Ohio, as well as the Cincinnati Reds baseball team. He made a real name for himself in his entrepreneurial journeys.

This Crosley is one of 3,182 units produced for 1947. The CC models came in various sizes, including station wagon, sedan, convertible, panel delivery, and pickup. The CC was introduced in 1946, but all models were referred to as 1947 because they emerged midway through ’46. Production on the CC models only lasted into 1948.

Although this post-war vehicle offered important new features, many things remained the same for the small auto-maker. The body and engine were new for the CC models, but the chassis and brakes remained exactly the same as those of previous models.

The 1947 Crosley is one of the strangest-looking cars out there—it’s so unique, it begs to be explored. It comes in the smallest package imaginable, all thanks to the insightful mind of Powel Crosley. Although his automobile company did not last, his inventive design lives on to this day through this small, pigeon-like pickup.

The End of an Era

Crosley’s story continues on with other vehicles like the Farm-O-Road pickup, which was largely used by farmers, and even into sports cars like the Hot Shot which was raced at Le Mans (until they ran short due to electrical failure). Though all of his Crosley automobiles were extremely unique and unforgettable, Powel’s success would fall short of making it big in the automobile industry.

Just after the expiration of his automobile production in 1953 there was a remarkable shift back to smaller and economical cars in the United States. Popularity among the Volkswagen Beetle began to rise to what would eventually become one of the most iconic vehicles among the U.S. market. It is only a wonder what could have been made of a micro-car manufacturer like Crosley, had they lasted only a few more years.

“Crosley.” The Makes That Didn’t Make It, www.makesthatdidntmakeit.com/crosley/.