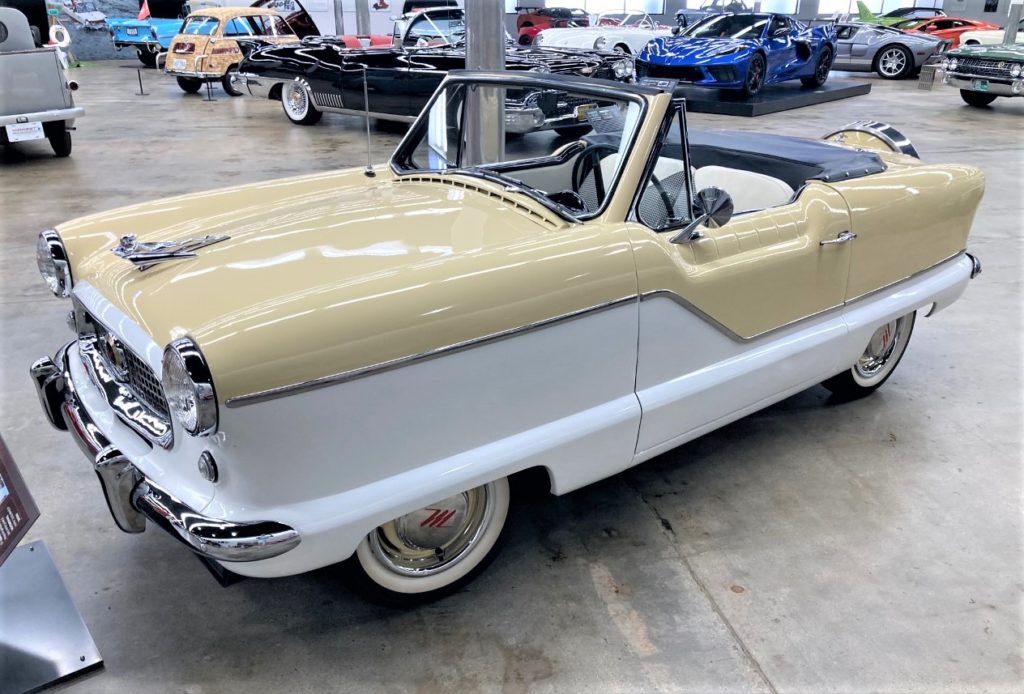 “Here truly is luxury in miniature . . . A watch-charm Rolls-Royce,” said Devon Francis in Popular Science in 1954. The Nash Metropolitan is an American-designed miniature car built in England from 1953 until production ceased in April 1961. The Metropolitan was manufactured and branded as the first American subcompact (small) car.

The 1960 Metropolitan before you was previously owned by Tom Wassenberg of Manhattan, Kansas and his father before him, Hank Wassenberg, until it was acquired by the Midwest Dream Car Collection. This Metropolitan is considered a Series IV but is adorned with a Series III “Flying Lady” hood ornament that looks massive, yet elegant, on this small car. Series IV production began in 1959 and included a world-famous 4-cylinder BMC Austin engine. With the engine compression ratio now increased to 8.3:1 (from 7.2:1), it produced a “thrifty” 55 horsepower that could yield about 40 mpg. That’s pretty remarkable when most cars of the period were getting about 8 to 10 mpg. This 1960 Metropolitan convertible was base-priced at $1,696.80 and is presented in its original color combination of autumn yellow and frost white. The black and white houndstooth cloth-covered seats with white vinyl trim are also factory correct. This car serves as an excellent example of an untouched factory original model, with the exception of an oil temperature gauge and non-factory power brakes.

This car has been called “the perfect blend of American comfort and performance standards, with the craftsmanship and gasoline economy long associated with European-built cars.” The idea for the Metropolitan was conceived by automotive legend George W. Mason, chairman of Nash-Kelvinator. During WWII, many women had entered the workforce and proven, given a chance, they could do absolutely anything a man could do—including driving and handling an automobile. The once predominantly male-oriented automotive industry was approaching a major shift. Mason decided the time had come for a car tailored to the female automobile market.

As the idea came to fruition, Mason did something no other automaker had done before: He asked the public what they wanted in a car. The Metropolitan was patterned from a concept car, the NXI (Nash Experimental International), which was designed in the U.S. by freelance designer William Flajole for Nash-Kelvinator. This early prototype went on public display in January of 1950 at the Waldorf-Astoria in New York City to gauge the public’s reaction. The enthusiasm over the prototype convinced Nash that a strong market for the car existed as long as the price would remain competitive.

Several prototypes would follow the NXI, which would then be designated as the NKI (Nash-Kelvinator International). These new prototypes incorporated the changes the public wanted to see, such as a column-mounted gear shift and bench seat (in place of bucket seats with a floor shift), electric windshield wipers, a heater, an AM radio, a cigar lighter, and, for a touch of luxury, a continental-type rear-mounted spare tire with cover. The public also wanted an economical price tag of around $1,000. When production started in 1953, the new Nash was to be called the NKI Custom. Two months into production and before public release, the name changed to Metropolitan and new badging was created to fit the existing holes where the NKI Custom script had already been placed. Nash dealers had to replace the script on some models that had already arrived at their dealerships. The Metropolitans badged as Nash went on sale in March of 1954. In May, Nash and Hudson merged to form American Motors. Following the merger, Metropolitans sold by Nash dealers were badged as Nash Metropolitans while those sold by Hudson dealers were badged as Hudson Metropolitans. In 1957, both the Nash and Hudson names were dropped and all future Metropolitans were simply sold as Metropolitans through Rambler dealerships. Production of the Metropolitan continued until April of 1961. However, since so many remained in inventory ready to be shipped, approximately 412 were designated and sold as 1962 models in the United States.

The Metropolitan was exciting; it was different; it was the change the automotive industry needed. Although it initially faced mixed reviews from the public, Nash got the response it was looking for: a consensus that the “Metropolitan is a good thing in a small package,” as Popular Mechanics put it in 1954.

The Metropolitan has earned its place among the greatest cars of all time. It is credited as pushing forward the Big 3 automakers’ development of compact cars, thereby causing a shift in the automotive industry. The Metropolitan Owners Club of North America is dedicated to the preservation and enjoyment of these vehicles. Nearly everyone who has had the chance to own, drive, or ride in a Metropolitan has loved the car’s handsome features, compact size, and attention to detail. It’s an elegant compact car for the ages.

A bit more about the previous owner . . .

Henry G. “Hank” Wassenberg was born in Blaine, Kansas in 1926, and he lived the majority of his life in Marysville, Kansas until his passing in 2012 at the age of 86. Tom is one of Hank’s six children. During his life, Hank became a cofounder of LinPepCo, a Pepsi franchise based in Lincoln, Nebraska. He also became president of the Cubs Distribution in Lincoln and Omaha, founded Blue Valley Realty Company in Marysville, and was a shareholder of Marysville’s Citizens State Bank.

Hank bought and owned this Metropolitan because he enjoyed the car for its beauty, simplicity, and open-top driving experience. He loved taking his children and grandchildren for rides in the car, and eventually it passed on to his son, Tom. This Metropolitan was enjoyed by generations of the Wassenberg family for decades until it eventually entered the Midwest Dream Car Collection. Tom said he always hoped it would go to a place where people could enjoy it for what it is and for the wonderful memories that were made in it.