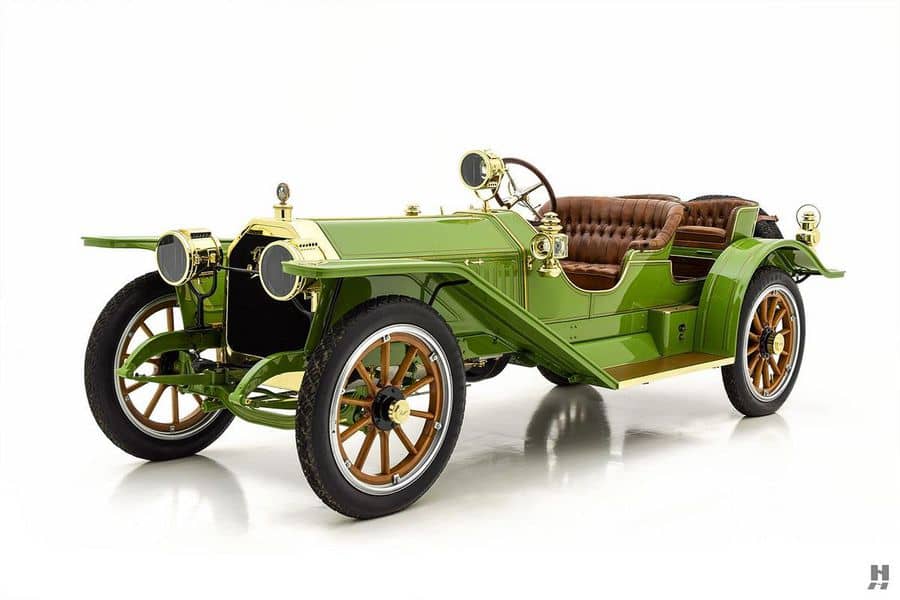 The Peerless Motor Car Company of Cleveland, Ohio was, for a brief period, one of America’s most exclusive automobile companies. Along with Packard and Pierce-Arrow, the trio of car makers known as “The Three Ps,” were equally revered for their quality, refinement, and engineering excellence. Peerless popularized a number of vehicle innovations that later became standard equipment, including drum brakes and the first enclosed-body production cars.

Established in Cleveland in 1900 at 43 Lisbon Street, Peerless Motors began manufacturing automobiles while using De Dion-Bouton engines under license from the French company. Engineer Louis P. Mooers designed the first Peerless models, as well as several proprietary engines. The first Peerless-branded vehicles appeared in 1902, with a front-mounted engine driving the rear wheels through a shaft. This later became the standard vehicle propulsion layout for automobiles. In 1904, Mooers designed the Green Dragon racecar and enlisted Barney Oldfield to drive it. The Green Dragon brought notability and success to Peerless, as Oldfield used it to set a number of early world automobile speed records.

In 1905, the 35 horsepower Green Dragon competed in the world’s first 24-hour endurance race in Columbus, Ohio. Piloted by Earnest Bollinger, Arthur Feasel, and briefly by Barney Oldfield, the Peerless led the race for the first hour before crashing into a fence, later finishing in 3rd place.

From 1905 to 1907, Peerless experienced a rapid expansion in size and production volume. As the Peerless namesake grew in fame, the company began producing increasingly higher-priced models with a focus on luxury. In 1911, Peerless was one of the first car companies to introduce electric lighting on their vehicles, with electric starters added in 1913. In 1915, the firm introduced its first V8 engine, intending to compete with the Cadillac V8 introduced a year earlier. This model became Peerless’ staple production vehicle until 1925, when engines produced by other manufacturers were first used in Peerless models.

In 1929, the entire Peerless range was redesigned to compete with other vehicles produced by Stutz and Marmon. This move saw increased sales, and for 1930 another design refresh was undertaken. The Peerless-designed V8 was replaced by a Continental straight-8 as a cost-saving measure. However, the Great Depression that began in 1929 greatly reduced the sales of luxury automobiles. Peerless stripped down its production and attempted to market one line of vehicles to wealthy Americans who were not affected by the depression. In 1930–31, Peerless commissioned Murphy Body Works to design what the company envisioned as its 1933 model. The task was assigned to a young Frank Hershey, who produced a remarkably clean, elegant vehicle. A single V16-engined 1931 Peerless was finished in June 1931, the last Peerless ever produced.

Peerless remained an idle business until the end of Prohibition in 1933 allowed the manufacture of alcohol. Peerless then revamped its factory and gained a license to brew beer under the Carling Black Label and Red Cap ale brands from the Brewing Corporation of Canada.

Hershey’s single prototype V-16 remained in the Peerless factory until the end of World War II and it is now owned by the Crawford Auto-Aviation Museum.

The incredible 1909 Peerless Model 25 Raceabout on display at the Midwest Dream Car Collection is a stunning Brass Era sporting motorcar with power and presence in excess. Finished in a brilliant apple green color, this car wears evocative four-passenger open coachwork crafted in the spirit of the factory raceabouts of the period. The exhaustive detail continues beneath the long hood where the enormous 825 cubic-inch T-head inline six rests. In traditional fashion the three pairs of cast-iron cylinders sit atop an alloy crankcase. The cam sits in the bottom end driving exposed pushrods and valve springs. Like the rest of this car the massive engine is in concours condition authentically presented with black porcelain cylinders, natural finish crankcase, and numerous brass and copper fittings. Peerless built only 1618 cars for the 1909 model year making the Model 25 one of the most exclusive American automobiles of the early twentieth century.