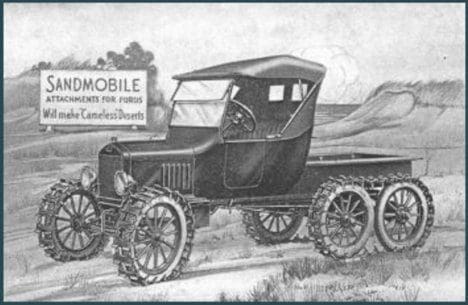 The information in this document is provided by the Model T Ford Snowmobile Club. The citation is listed below along with a link for this information and more.

This snowmobile is a 1920 Model T made by Ford with an Ossipee Snowmobile Company Kit attachment. It originated in Ossipee, New Hampshire, to aid in coping with the long, harsh, and snow-filled winters. This particular Snowmobile is an early example of this vehicle, made before the Snowmobile kits were first sold to dealers across the U.S. This specific kit was fit to the 44-inch gauge, which meant it was made for New England, where horse-drawn sleighs were common. The Snowmobile could then fit in the same tracks on the road so it would not scare the horses with uneven tracks and surface marks.

This Model T has an almost-perfect body, and it has survived nearly 100 years with only some restoration. This Snowmobile sports new upholstery, paint, bearings, seals, and a radiator, and it starts and runs perfectly.

Twelve-thousand Snowmobile kits were made throughout the company’s life, and this is believed to be one of about 400 kits still in existence. A few pieces have been replaced (such as the tracks) by Brian Moriarty, the seller of this Snowmobile and an expert on Model T Snowmobiles. The new tracks are nearly indistinguishable from the originals, which rotted away over the years in a barn.

HISTORY OF THE MODEL T SNOWMOBILE (by Brian Moriarty)

In 1917, Virgil D. White received a patent for an attachment designed to convert a Model T into a “Snowmobile,” a name he coined and copyrighted. White, a Ford dealer in Ossipee, New Hampshire, built his first snowmobile attachment in 1913.

White put the attachment on the market during the winter of 1922, after “perfecting it in every detail,” selling the attachments exclusively through Ford dealers. The Snowmobile attachment consisted of the complete package necessary to convert a Ford into a reliable snow machine. Skis made of metal and wood, along with rear-mounted tracks, were the most noticeable differences.

To create the Snowmobile, the standard passenger car’s rear axle and driveshaft, rear spring, and radius rods were removed and replaced with a 7-to-1 Ford truck worm gear driveline attached to the frame by a pair of cantilevered semi-elliptical springs. Special heavy-duty wheels to fit the TT rear axle were provided, along with anti-skip chains.

The earliest units sold by White included tracks made of metal cleats joined by a heavy fabric. White later switched to all-metal tracks consisting of stamped steel shoes connected by chain links. Additions to the Snowmobile attachment in later years included a special box affixed to the left frame for the battery displaced by the idler axle. A cast-iron step sporting the Snowmobile insignia took the place of running boards, which were removed to allow room for the track system.

The “Ford on Snowshoes” was offered in three different gauges. For those living where automobiles were standard, the 56-inch gauge was recommended. A narrower 44-inch gauge allowed the Ford to be driven in the tracks of horse-drawn bobsleds. Thirty-eight-inch gauge was offered for Ford owners where narrower sleigh tracks were standard, such as in parts of Canada. A special slip-on body of hard maple with four coats of paint was included as part of the narrow-gauge package.

The Snowmobile became an indispensable convenience for people requiring rapid, dependable transport in all kinds of weather. Country doctors and rural mail carriers were the most common users of this type of vehicle. Other customers of the Snowmobile included public utility companies, lumber companies, traveling salesmen, fire departments, school bus and taxi drivers, undertakers, grocers, milkmen, truckers, and cranberry growers. When the father of President Calvin Coolidge died on March 18, 1926, a Model T Snowmobile led the Coolidge funeral procession over the snow-covered hills of Vermont.

Makers of the Snowmobile attachment boasted the ability to travel over two and a half feet of unbroken snow at an average speed of 18 miles per hour. Those who had a Snowmobile certainly used it with great satisfaction. The conversion kits were quite expensive. The attachment in 44-inch or 38-inch gauge for mounting on a Roadster, or the 56-inch gauge for all body styles prior to 1926, listed at $395.00 in West Ossipee, New Hampshire. A 56-inch-gauge attachment for the one-ton truck had a more economical price tag at $250.00 because it required no special driveline and suspension. It still came with heavy-duty 30 x 30.5-inch wheels to mount on the rear axle, however.

With skis removed and front wheels installed, the Snowmobile became a Sandmobile, useful for transport through deep mud and heavy sand. A number of units sold as Sandmobiles were used in South Africa, Algeria, Egypt, and the Florida Everglades.

In 1923, White produced only about 70 units. In 1925, the manufacturing rights to produce snow automobile attachments were sold to the Farm Specialty Manufacturing Company of New Holstein, Wisconsin, which began marketing its own version of the product in 1926.