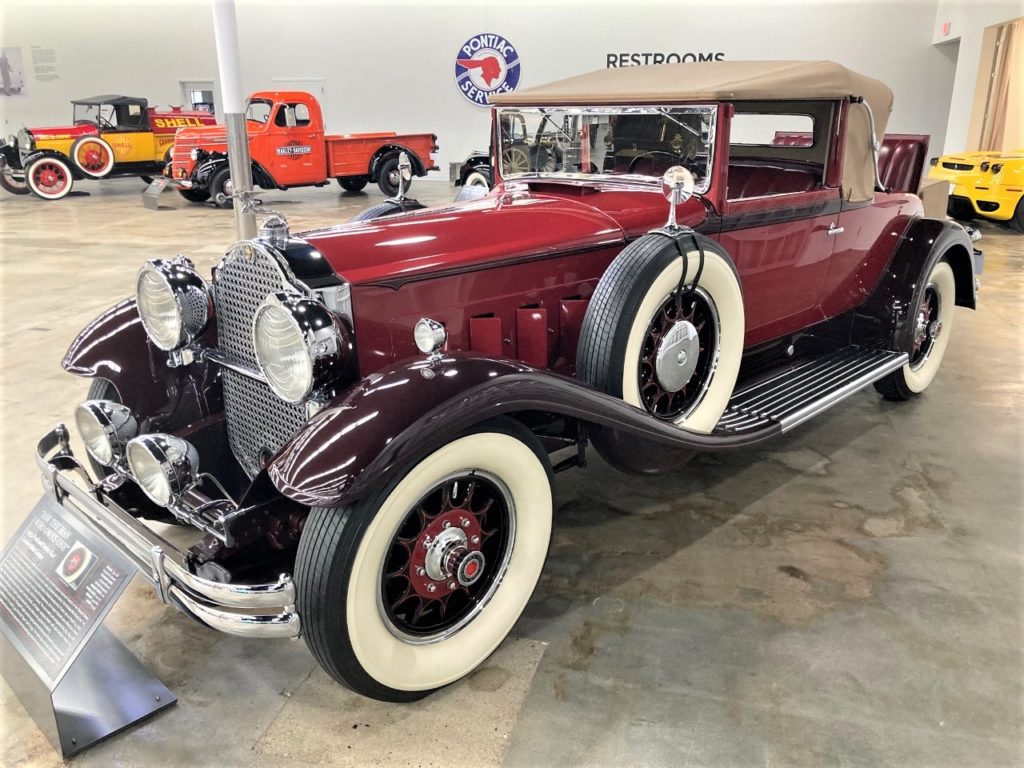 Packard’s rise to the top of luxury auto-making began in 1907, as it introduced the Model 30 to the American market. Originally creating their first car in 1899, James Ward Packard and his brother, William, followed with 399 more automobiles they built in a Warren, Ohio factory. While trying to beat the horseless carriages of Winton, one of Detroit’s wealthiest families, Henry Bourne Joy bought a Packard for himself. The reliability of the car impressed him so much that he and a list of investors put their money toward these two brothers’ dream of creating an automobile company.

Moving away from the single-cylinder engine used in their first 400 cars, engineers for Packard began creating their first 12-cylinder cars from 1915 to 1923 and then moved into production of their straight-8. Entering the 1930s, Packard’s fight against the Great Depression adopted a unique approach: Build even more lavish and expensive cars than before.

From 1925 to 1931, Raymond Dietrich served as the designer for the Packard Motor Car Company. Creating some of the company’s greatest masterpieces, Raymond had studied engineering, design, and automotive painting, making him knowledgeable in the building of cars from start to finish. The Series 840 was one of Dietrich’s final designs and one that would leave his name forever engraved in the Packard legacy when he moved on to other projects through Ford Motor Company and the like.

Although Packard was synonymous with luxury, the company was much smaller than the big auto-makers like Ford and GM. Thus, it could not take small-loss hits like its competitors. New ideas could make or break the company, which made sales highly volatile. In one advancement unique to 1931, Packard introduced Ride Control, a system that allowed the hydraulic suspension and shocks to be adjusted from within the car.

Packard introduced its Eighth Series cars on August 14, 1930, as the Depression took hold. The new models were designated 826, 833, 840, and 845, and they featured large hubcaps, three-spoke steering wheels, and deeper-sweeping fenders with plain bumper clamps.

“In 1931, Packard introduced the Eighth Series,” Bonham’s Auction House explains. “In contrast to its predecessors, the Eight’s engine produced 120hp in Deluxe trim, up from its initial 85. Aesthetically speaking, thanks to the gradual year over year changes, the styling was even more refined and the details magnificent. The 840 wears some of the most elegant bright work seen on any car of this era. Packard had truly hit their stride in the 1930s and would continue to set the bar high throughout the remainder of the decade.”

This particular Packard was built in 1931 with a straight-8-cylinder engine paired with a 4-speed manual transmission. The engine was a 384.8-CID L-head producing 120 horsepower at 3,200 rpm. It contains dual side-mounted mirrors, stone guards, a rumble seat, a tan convertible top, and a covered rear trunk. Prior to its ownership by the Midwest Dream Car Collection, this car, along with the 1932 Packard, were part of the Oliver Collection in Oklahoma. This convertible coupe sports a burgundy exterior and maroon interior, with immaculate paint restoration. One interesting point to note is its use of moving-center headlights: As the wheel turns, the light turns with it, a visionary feature that was far ahead of its time.

The Packard Motor Car Company would continue creating some of the finest and most elegant cars in automotive history. Their slogan remained, “Ask the man who owns one,” as they built a reputable name and some of the most desired cars of collectors worldwide. Ultimately, the company found its demise in 1956, as it was absorbed into the Studebaker-Packard Company due to falling sales numbers. However, cars like this Series 840 and similar creations by legendary designers like Raymond Dietrich will forever mark Packard’s place in history.

This Classic Car Club of America-certified Classic has a straight-8-cylinder engine and a 4-speed unsynchronized manual transmission. This vehicle was previously part of the Roy Oliver Collection, and it is number 479 of 626 “840s” built in 1931.

The MSRP for this Series 840 was $3,595. It features the optional trunk (a $125 value), luggage rack, and wire wheels (a $60 value). 1931 was the first year that Packard fitted its vehicles with a Stewart-Warner mechanical fuel pump, replacing the former vacuum tank. The Bijur chassis lubrication system was also automatic.

Packard had a cult following among people who had made it and wanted to show that they had made it. In 1928, Packard created one of the first automobile proving grounds, a test track that became known as the world’s fastest speedway. Early Packards set land-speed records at nearly 150 mph. However, even the richest stopped wanting to buy the opulent Packards in the heart of the Great Depression. Alvin McCauley, the head of Packard, decided the luxury car could not make it alone in the auto industry, leading Packard to focus on producing more affordable vehicles for the market.