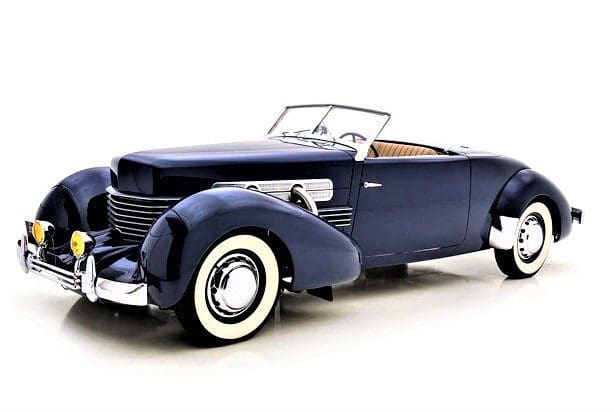 Based in Auburn, Indiana, Cord was the brand name of an American luxury automobile company that was manufactured from 1929 to 1932 and again in 1936 and 1937.

The Cord was originally conceived as a smaller, less expensive model Duesenberg, but prior to its introduction it was decided that the Cord would become its own marque within the Auburn Automobile Company. Marketed as the middle-priced car between the less expensive Auburn and top of the line Duesenberg, it was well positioned to be a success. When Cord introduced their Model L-29 in 1929, they became the first American automobile manufacturer to introduce front-wheel drive. The Model L-29 was an immediate success with brisk sales, unfortunately a few months later the stock-market crashed and dampened sales leading to the car being discontinued in 1931. This however was not the end of the Cord story as a completely new Cord would be introduced for the 1936 model year, known as the Cord 810. The new Cord caused a sensation at its debut at the 1935 New York Auto Show. The crowds were reportedly so dense that attendees stood on the bumpers of nearby cars to get a better look. Even though short-lived, the 1936 Cord 810 and 1937 Cord 812 were a styling and performance success and came in numerous model configurations starting off at the entry-level sedan at $1995 to the top-of-the-line Custom Berline “Westchester” at $3575. The cars came equipped with a Lycoming 289 CID V-8 engine but could be upgraded with the optional Schwitzer-Cummins supercharger which upped the horsepower from 120 to 170. The art-deco body style was the work of Duesenberg designer Gordon Buehrig and features a “coffin-nose” hood with striking wraparound louvers, pontoon fenders and on supercharged models, racy exposed exhaust pipes. The overall design is so stunning that it is one of the few automobiles deemed worthy of including in the Museum of Modern Art in New York. The Cord 812 two-door Cabriolet was the rarest model with just 195 being produced between the two years. If equipped the car’s supercharged performance was undeniable making it one of the fastest cars in the world during the pre-war time period. While the design would prove timeless, time had run out for Cord. Some 3000 of the 810/812 series were made before production came to a halt in August 1937.

Art Deco Style at its finest finished in a deep blue that could only be matched by the beauty of a sapphire gem, best describes the Midwest Dream Car Collection’s 1937 Supercharged Cord 812 finished in a stunning deep Geneva Blue. The deep blue finish is accented by the saddle brown leather seats and matching saddle brown cloth convertible top.

This sporty two door cabriolet version is appropriately known as the Sportsman model among Cord enthusiasts and is the recipient of a detailed professional restoration. Powered by a Lycoming V-8 engine mated with the optional Schwitzer-Cummins centrifugal supercharger this car puts out an impressive 170 hp that can reach speeds up to 110 mph. The transmission is a four-speed manual, shifted by a unique “electric-hand” pre-selector switch mounted on the steering column. The turned-metal dash makes an impressive backdrop for the array of gauges, including individual hand cranks used to operate the concealed headlamps, also an industry first in automotive design.