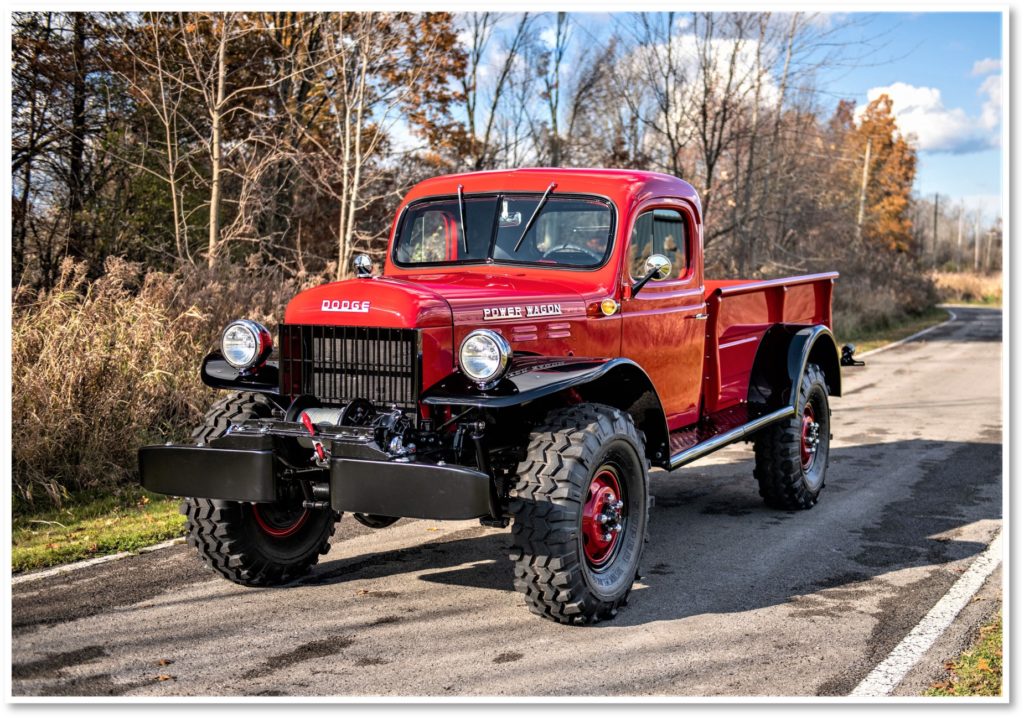 The predecessor to many four-wheel drive pickup trucks in use today, the rugged 1-ton Dodge Power Wagon hit the showroom floor in 1946.  Originally designed and used as a military workhorse, Dodge decided to adapt the vehicle for civilian use, making it the first known series of medium-duty 4×4 trucks to be mass-produced. These rugged trucks were especially appealing to returning soldiers who sought out Dodge trucks for their durability and near unbreakable build quality.  Meant to compete with military-based Ford/Marmon-Herrington and GMC trucks, the Power Wagon had an enclosed all-weather civilian cab and a purpose-designed 8-foot cargo box and wheelbases ranging from 126 to 147 inches. Power was through a 230 cubic-inch flathead inline-six engine mated to a 4-speed manual transmission. A two speed 1.96-1 ratio low range transfer case for part time 4-wheel drive.  The Military style Power Wagon had three series during its lifetime, with different model numbers. The nominal one-ton rated Power Wagon’s gross vehicle weight rating (GVWR) was 8,700 pounds and its maximum payload was 3,000 pounds. It was produced starting in the 1946 model year with U.S. sales ending in 1968. Export sales continued through 1978. The Power Wagons mobile power source is achieved by using a two-speed transfer case. With the two-way power takeoff, the front shaft could operate the optional winch or pumps, while the rear shaft, hooked up to a pulley, could operate a mower or a saw if equipped. The power takeoff lever, including rotation control is inside the cab. With these features along with the trucks off road capabilities, the Power Wagon was desirable in numerous industries including agriculture, public utilities, law enforcement and firefighting.

This 1951 second series (1951-early 56) model is equipped with the factory correct 230 cubic-inch inline six-cylinder engine mated to a 4-speed manual transmission. It is equipped with a front mounted optional winch which is operated by the Power Take Off (PTO) transfer case. The interior is fitted with a black leather bench seat with a simple dash layout incorporating a group of four gauges (Fuel, Amp, Temp, Oil) with silver/grey faces. Finished in bright red with contrasting black fenders and running boards along with the highly polished wood floor in the cargo bed it makes an imposing statement in size and beauty. Undergoing a complete frame off restoration in 2021 it is one of the nicest examples of an early Dodge Power Wagon you will find.