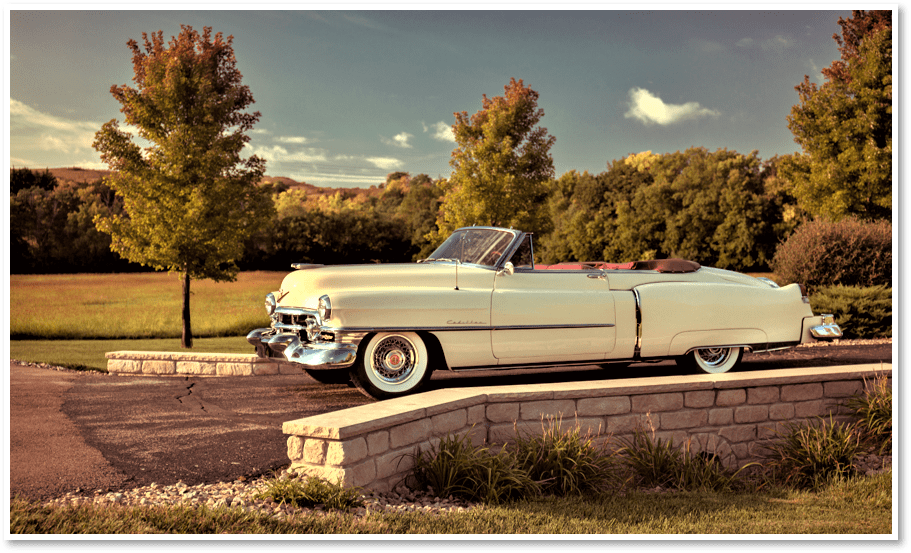 Cadillac is often remembered for the radical styling of its models by the end of the 1950s. However, the GM Division’s dramatic postwar renaissance was far more revolutionary, with the all-new bodies and styling it produced for 1948 and the dawn of Cadillac’s all-new modern overhead valve V-8 engine in 1949. Annual updates provided additional refinement, with revisions for 1950 including lower and sleeker contours, long rear decks, sweeping front fenders, and a broken rear-fender line. Cadillac’s signature “egg-crate” grille became even larger, and the hood extended out further than before, for a truly commanding visage. A modern one-piece windshield, rounded parking lights, and long, sweeping rear fenders with neat, upwardly flowing tailfins rounded out the stylistic changes.

For 1950, the Series 61 and 62 were extensively redesigned, with lines that would continue for the next few years. The cars were longer, lower, and more solid-looking. The side of the car flowed into the rear fender, where the leading edge was interrupted by an imitation air intake. One-piece curved windshields were introduced, the grille became more massive, and the hood protruded further in the center. The Hydra-Matic transmission became standard on the Series 62 and optional on the Series 61.

Changes for 1951 mainly amounted to more chrome for the Series 62 and the Hydra-Matic becoming standard on the Series 61, before that line was discontinued mid-year due to slow sales. The 1952 model year was an anniversary year for Cadillac, mainly reflected in more trim, fancier gold-colored badges, scripts, and V emblems. The exhaust now exited through the rear bumpers, and 4-barrel carburetors became standard. Power rose to 190 hp.

Amid the generation of Harley Earl’s most iconic designs, to commemorate the 50th anniversary of Cadillac, the V-shaped hood and deck emblems were done as gold castings. The Series 62 sedan was also characterized by a higher rear deck lid contour, which provided additional luggage space. Backup lights were now standard equipment incorporated into the taillights. The grille wraparound panels were redesigned once again, this time featuring broad chrome trim below each headlight with side-scoop styling and a gold winged emblem mounted in the center. At the rear, all Cadillacs adopted a through-the-bumper dual exhaust system. Deck ornamentation took the form of a Cadillac crest over a broad golden V. New standard features included self-winding clocks, improved direction-signal indicators, glare-proof mirrors, stannate-treated pistons, and a 4-barrel carburetor. Engine output for the 331-CID V-8 rose to 190 horsepower. Sales fell to 70,255, but with the Series 61 out of the way, Series 62 sales accounted for a record 78% of all Cadillac sales.

Celebrated for special projects like his Buick LaSalle and Y-Job or arguably his most famous car, the 1953 Corvette, Harley Earl is one of the most well-known and dominant individuals to ever place a hand on the automotive industry. Earl began his journey with Cadillac under the GM umbrella in the 1920’s. After dropping a bomb on the automobile industry in 1930 with the original Cadillac V16, Earl went on to work under Buick and Chevy as well, creating some of the most iconic vehicles in the world.

Famous for his massive chrome grilles, huge swooping lines, large tailfins, aviation-inspired queues, and remarkable attention to detail, Earl didn’t do things like the other guys. It has been said that Harley Earl is possibly the most persuasive force that has ever touched automotive design.

This 1952 Cadillac Series 62 Convertible is just another in a long list of beautifully sculpted cars from the mind of Harley Earl and his team. Largely shaping the way we think about automotive design, Earl’s work has lasted long into the 21st century and will be forever remembered by car collectors, car enthusiasts, engineers, and designers alike.

This information and more can be found at the following links: