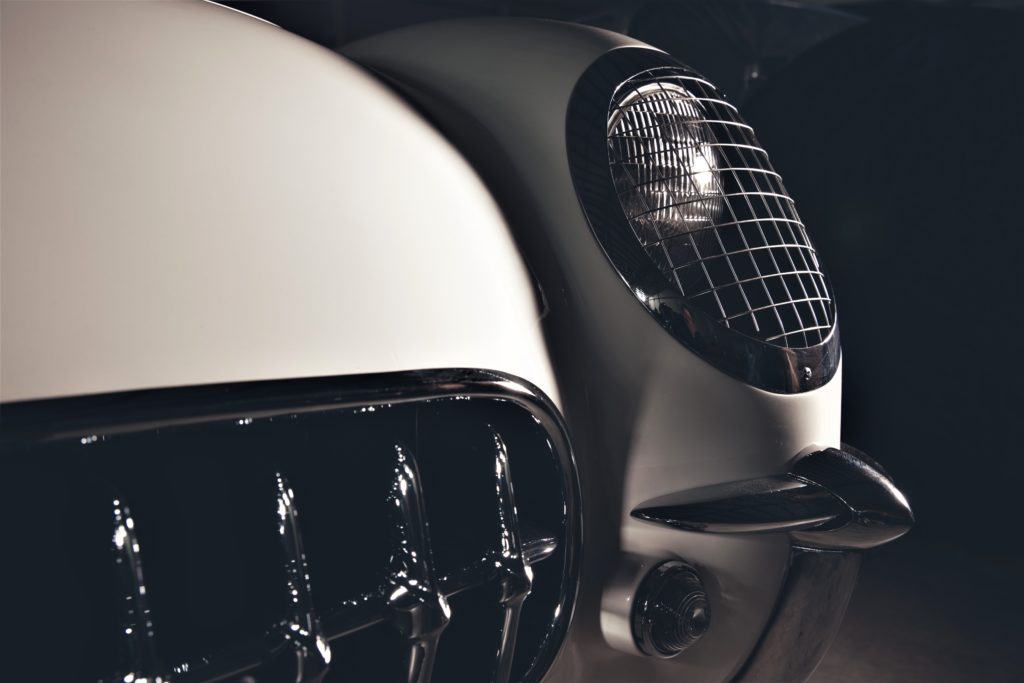 1953 introduced the world’s first Corvette. This Corvette acquired by the Midwest Dream Car Collection is number 201 of 300, and it has been restored to its original factory state.

*Much of the information in this section is provided by the sources listed below. Please refer to the works cited for this information and more.

In 1951, project Opel (as it would become known) was initiated at GM. Harley Earl convinced those at GM that a two-seat sports car needed to be made under the special projects division. The prototype, which would later become known as the Corvette, was unveiled at the 1953 General Motors Motorama in New York City. An overwhelmingly positive response sent the Corvette into production only six months later. Chevy had only enough time and resources to release 300 units in the first production year.

All 300 models were polo-white convertibles, with a red interior and a black canvas top. The engine is a “Blue Flame” 6-cylinder paired with a 2-speed Powerglide automatic transmission and drum brakes. Though sleek and beautiful, the Corvette did not become a real player in comparison to its European sports car competitors until years later, with the introduction of its famous V-8 engine.

The production of the car took place on a makeshift assembly line at the GM plant in Flint, Michigan. With a full-scale production run scheduled for the 1954 year, 1953 production was limited in many ways. Build quality did not quite reach the standard it would later achieve. Nonetheless, the 300 Corvettes produced that year were ultimately some of the greatest ever made.

In an introduction to the Corvette, Chevrolet says, “While [the Corvette] is never going to take the place of the family car, I for one am going to have a lot of fun owning it. Now this could never have happened unless the world’s largest manufacturer of automobiles had put its tremendous resources into designing and building an American sports car to uphold American leadership in every field of transportation. They build her to handle like an angel, with every ounce of weight right where it belongs, for perfect balance. Clean and sleek and efficient-looking, and light and strong. They kept the cockpit simple and practical. For the power plant, they started with the finest valve and head engine. Some extra, special features include higher compression, triple side-mount carburetors, and dual exhaust, give her 160 horsepower . . . In addition to the speedometer, there’s a tachometer, to measure engine revolutions. They call her Corvette, and she belongs to the highway, just for the sheer and simple joy of driving.”

Harley Earl, the first Corvette designer, became a legend in the automotive industry through his advanced and innovative car designs. From his first commissioned automobile, the LaSalle Phaeton, to the creation of the iconic Buick Y-Job, to the Corvette, his most recognized cars today are undeniably striking from every angle. His hand in the molding of automotive design has created and inspired generations of classic cars that will forever remain a piece of history.

Quotes about the legendary Corvette and Harley Earl’s work . . .

“Through the years, Corvette certainly offered state-of-the-art features, designs, technologies and performance. No matter what your station in life, when you’re behind the wheel of a Corvette, you’re an Olympic athlete—able to go faster, stop quicker, and turn better than everyone else.”
Tadge Juechter, Vehicle Chief Engineer for Corvette

“Harley J. Earl is one of the most hotly collected artists of the 20th Century, whose name is ironically often unknown among collectors of his work.”
Leslie Kendall, Chief Curator of the Petersen Automotive Museum

To this day, the Corvette remains an American legend that is recognized worldwide for its sporty look, strong front engine, and deep Chevrolet bloodline. As the first of its kind, this automobile will continue to be cherished for decades to come.