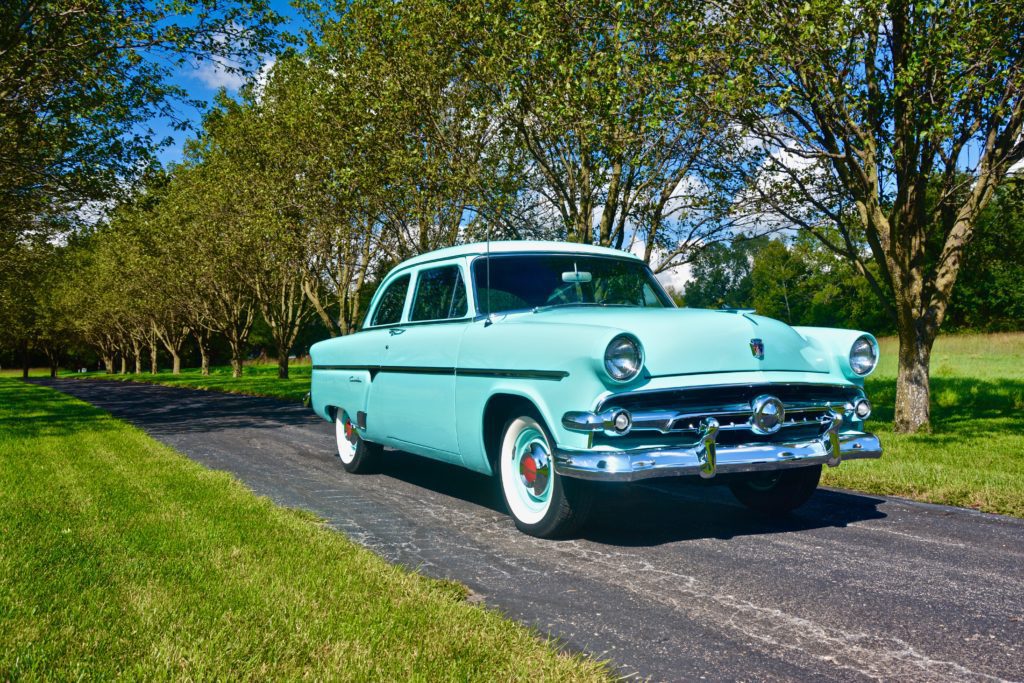 This 1954 Ford Tudor Customline has been owned by one family since it rolled off the production line. Purchased by Frank Dalmolin in 1954 from the factory, it was driven to Arizona and kept there until 1973.

“Having lived through the Great Depression, my grandfather was very frugal and purchased the mid-range Customline with only two options—tinted glass and a radio. This car has the first-year overhead valve 223 CID 6-cylinder (115 horsepower) engine and a three-speed manual column shift. The car has just over 78,000 miles on the odometer today.”

The car was completely rebuilt in 2013. The engine and transmission themselves were rebuilt, along with new brake and exhaust systems. Additionally, the car was repainted in the original sky-haze green, complemented by a new interior headliner, seat covers, and carpets. The door panels are original. New original-style cloth-covered wiring was used throughout, and many parts were re-chromed, along with numerous other finishing touches. Many parts were powder-coated, and everything was either rebuilt or replaced with new parts.

This car was featured in Collectible Automobile magazine in 1990 and 1999. It is also pictured in the hardcover book The American Auto—Over 100 Years (p. 291). It has become an Internet icon in references to 1954 Fords as well.

Ford built a full 293,395 Customline Tudors in 1954. The base price was $1,744 for a vehicle with a 6-cylinder engine and manual transmission. In 1954, Ford was the first in its field to offer ball-joint suspension. The base model was called Mainline, the mid-range was the Customline, and the high-end model was the Crestline.

Ford states, “For the man who enjoys owning the smartest two-door sedan in the neighborhood (and one of the roomiest, too) Ford offers this stunning Customline Tudor. And you have a choice of colorful new fabrics with dark pleated vinyl bolsters. Trim on door panels is beautiful fiber-grained vinyl in colors and patterns to match seat fabrics.”

The car was purchased for the collection from Arthur Dalmolin II, the grandson of Frank Dalmolin. Arthur took possession of the car in 1973.

The car’s 2013 rebuild has returned it to nearly perfect condition, as it would have looked directly after leaving the factory. It’s been owned and loved by the Dalmolin family for over 60 years.