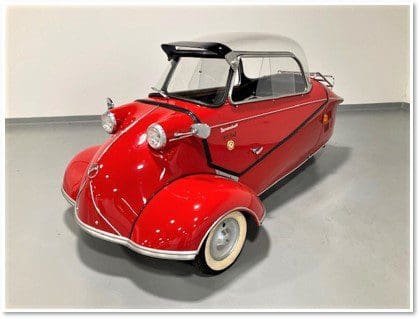 In the world of microcars, few have been as successful as the adorable 3-wheeled Messerschmitt KR200. The history of the tiny Messerschmitt car dates back to 1952, when aircraft engineer Fritz Fend approached German aircraft manufacturer Messerschmitt with his idea for manufacturing small cars. These small cars appealed to Messerschmitt, who was currently banned from manufacturing aircraft following WW II. While the Messerschmitt name and insignia were used on the car, a separate company, incorporated as Regensburger Stahl-und Metallbau GmbH, was created to manufacture and market the vehicle. The car was loosely based on Fends invalid carriage known as the Fend Flitzer, which had shown great success. Fends aircraft background is evident in the many styling cues on the KR200 such as the aircraft style steering bar, narrow fuselage type body and clear plastic bubble canopy. The Messerschmitt KR200 came in three body styles that included a 1-door coupe, 1-door convertible and 1-door roadster. The first Messerschmitt was known as the KR175 with the KR200 model rolling out in 1955. The KR200 was nearly a total redesign with changes being made to the canopy, frame, fenders, suspension and engine mounts, yielding a much better car than its predecessor. Tire size was also slightly enlarged. The new KR200 model was an instant success with nearly 12,000 rolling off the assembly line in 1955, its most successful year. The KR200 ran on a 191 cc Fichtel & Sachs forced-air (fan) cooled single cylinder two-stroke engine. A unique feature of the Messerschmitt was the engine had two sets of contact breaker points and, to reverse, the engine was stopped and then restarted, going backwards. This was done by pushing the key further in the ignition switch than normal. One result of this was that the KR200’s sequential, positive-stop transmission provided the car with the same four gear ratios available in reverse as in forward movement. Top speed was approximately 56 mph. In 1956, around a year after West Germany joined NATO, Messerschmitt was once again allowed to manufacture aircraft and they soon lost interest in Fends microcars. Messerschmitt sold the Regensburg works to Fend who joined with supplier Valentin Knott to form Fahrzeug-und Maschinenbau GmbH Regensburg (FMR). FMR would continue to produce the KR200 through model year 1964 at which time production ceased.  A total of 30,286 Messerschmitt KR200s would be built and sold in its production run. The 1956 Messerschmitt KR200 in the collection of the Midwest Dream Car Collection is of the single-door coupe style with the plastic bubble top dome roof. It is finished in red with a black vinyl interior with tandem seating and optional radio. Fritz Fends name is inscribed on the exterior side of the car.