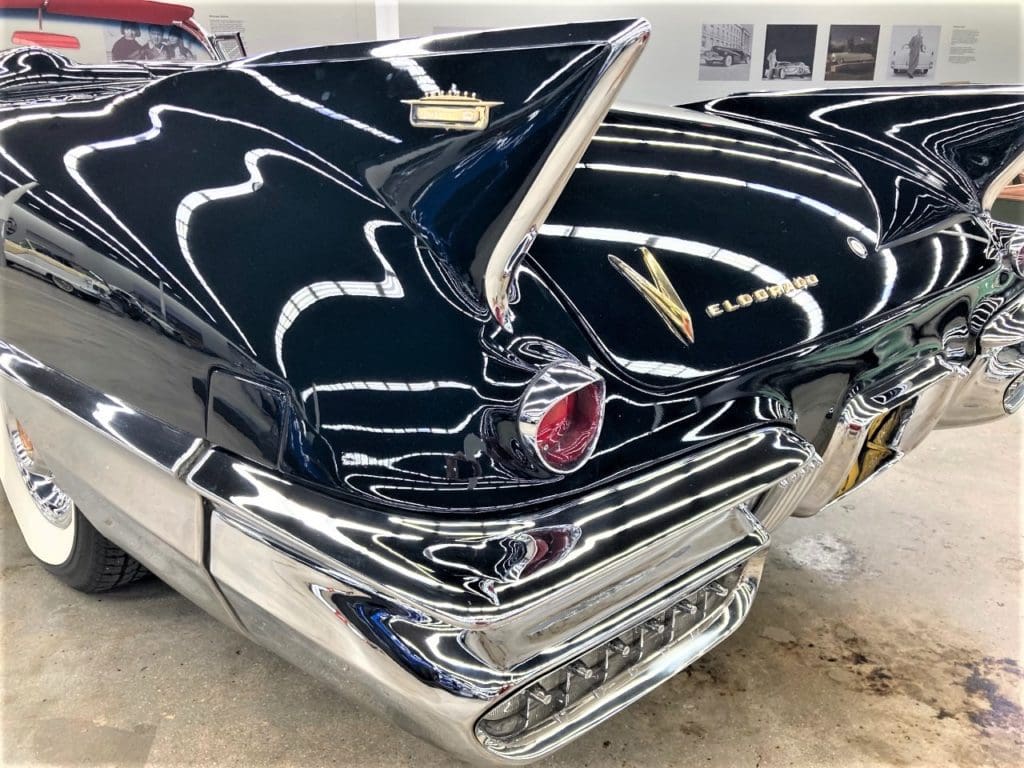 In the history of the automobile, nothing is as brilliant as the outrageous designs of the 1950s. Unofficially known as the “decade of innocence,” It was an era of automotive design unlike any other, and 1958 was no exception.

It was a significant year in the automotive industry, especially for General Motors as they celebrated their golden anniversary. As such, all GM models, including Cadillacs, received significant facelifts. It was a time of radical designs, bigger-is-better, and flashiness to excess, and luxury cars carried enough chrome to light up Broadway. Cadillac followed suit and started sporting even larger fins than in its 1957 models. By the close of the year, however, sales were down across the board, and Cadillac had its weakest year since 1954. Some say the cars were just to outlandish to sell well, but in fairness the 1958 recession and the resulting consumer shift toward smaller, more economical cars was probably the reason. As excessive as these cars seemed to some, they exuded the elegance and style that had come to be expected of luxury cars of the period, especially Cadillacs!

Riding on the pinnacle of this era of extravagance was the 1958 Cadillac Eldorado Biarritz Convertible. Measuring an enormous 223.4 inches long and weighing in at a gas-guzzling 5,070 pounds, it was no lightweight among the luxury cruisers of the period. Keeping with the legendary Harley Earl’s theme of longer, lower, and wider, the Eldorado Biarritz took beautifully styled luxury to the next level, a masterfully crafted rolling work of art that reigned supreme among the chrome monsters of the 1950s.

Its ferocity was more than suggested by the styling. The interior was on par with any luxury car of the era. It had the finest materials, and the long list of options included every comfort and convenience Cadillac could conceive, ensuring that driver and passengers alike enjoyed a top-of-the-line motoring experience. The Eldorado Biarritz’s combination of power and presence has arguably never been repeated in such spectacular fashion.

The Eldorado Biarritz was not a car for the ordinary. Certainly, if ordinary was the order of the day, you could buy a new Chevrolet for around $2,000. But for anyone who had an extra
$7,500 in their pocket ($65,000 in today’s dollars), a new Eldorado Biarritz Convertible could be parked in their driveway.

About this car, the pièce de résistance

The 1958 Eldorado Biarritz on display at the Midwest Dream Car Collection is one of just 815 that rolled off the assembly line that year, making it one exceptionally rare car. Originally finished in code-90 Olympic white with a black-and-white buffalo-grain leather interior, this numbers-matching Eldorado Biarritz checks all the right boxes for a car from the very heart of the jet-inspired 1950s. It wears a beautiful 10-year old restoration, which changed its exterior color to a high-gloss classic black finish. The interior seats and trim were restored to factory-new condition as well, by Jenkins of North Carolina, using striking all-leather hides in vermillion red. The high standards to which this car was restored are proven by its status as a Grand National winner in Pomona, California, and it has since won numerous “best in shows” at concours events. All the fine trim appointments associated with the Eldorado Biarritz are accounted for on this Cadillac, including its signature chrome-plated lower rear quarters, which carry a brilliant shine. Sitting behind the wheel of this impressive car, overlooking its expansive landscape of a dashboard, is truly a delight to the senses. A venerable sea of gauges, dials, and numbers fill the eyes and give the sense that one is in control of something more than just a car, and perhaps that’s just what the Eldorado Biarritz is.

The paint is amazingly brilliant and deep, the chrome gleams like new, and all the glass is in excellent condition. This car also features a power top finished in factory-correct black canvas that can be covered by the matching black solid-steel parade boot when retracted. Nothing was spared in the restoration of the engine compartment, either, which is evident in the use of the correct hoses, clamps, and wiring throughout, right down to the Cadillac-blue engine paint that completes the finish. The engine is the factory-original 365-CID V-8, which when coupled with the four-speed Hydra-Matic transmission provides more than ample power for cruising down the road at any speed.

Detroit never built anything else so grand, so opulent, and so pretty. Cadillac had become known as the “standard of the world” in the luxury car market, and the Eldorado Biarritz not only met this standard but raised the bar. From its sporty yet elegant body, with turbine-inspired wheels framed in period-correct wide whitewall tires, to the dashboard that has best been described as looking like jewelry under glass, this Eldorado Biarritz Convertible is a car like no other.

The 1958 Cadillac Eldorado Biarritz Convertible: A car that not only said you’d arrived, but that you were there to buy the place!