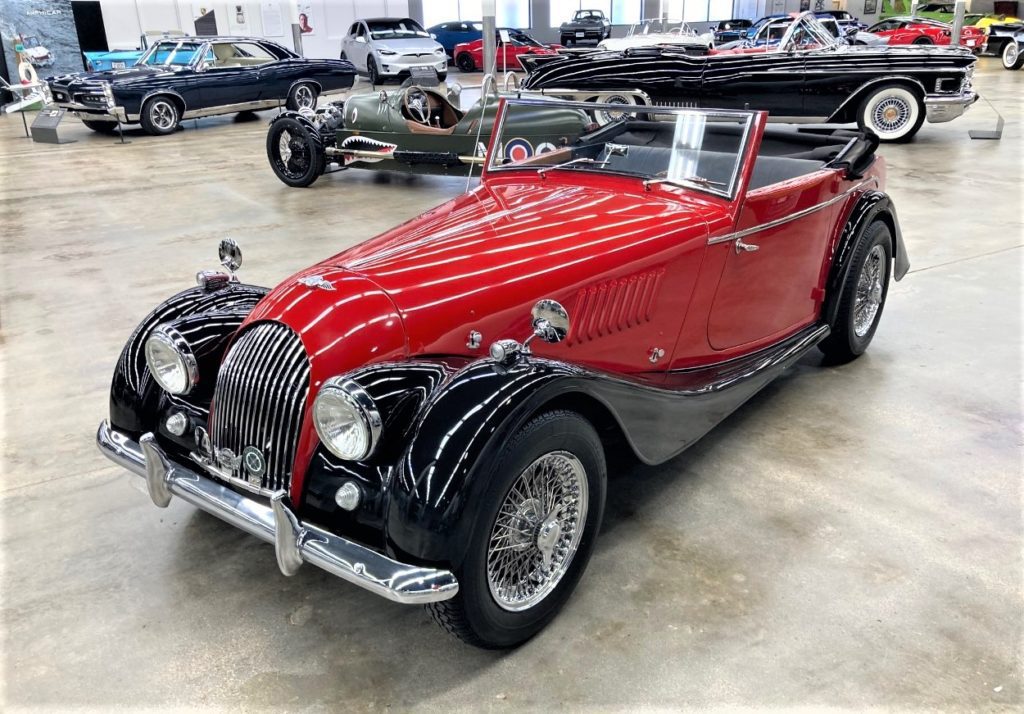 Uncharacteristic of the year, the 1961 Morgan Plus 4 Drophead Coupe is a classic car that yearns for performance. The Morgan Motor Company produced the Plus 4 for 19 years, from 1950 to 1969. Later revived in 1985, Morgan has continued to build Plus 4s to this day.

The Plus 4 Drophead is one of the rarer models for the 1960s. This is one of only 222 Plus 4s built in 1961. Distinguished by its larger suicide doors, short rectangular front window, and removeable top and windows, this Plus 4 has a style built for grand touring. The car also features authentic knock-off wire wheels.

A British car through and through, this Morgan is powered by a Triumph TR3 overhead-valve engine, as was standard in the day, and is paired beautifully with a moss box four-speed manual gearbox. Restored in the mid 2000s, this show car has won multiple awards including Best Drophead Coupe at the famous Mog West show in Cambria, California, in 2012.

After winning the 1601–2000 cc GT class at the 24 Hours of Le Mans in 1962, the Plus 4 became an icon among midsize GT cars. With a top speed of 100.3 mph, the 1991 cc straight-four Triumph TR3 engine pushed the small GT through countless victories and countryside cruises in its lifetime. Triumph built the TR3 as a response and upgrade to the TR2, which was made from 1955 to 1962. Because of its size and British nationality, the small engine is a perfect match for the Morgan Plus 4.

About the Morgan Motor Company

The Morgan Motor Company is an independent and family-owned motor car manufacturer that was originally conceived in 1910 by Henry Frederick Stanley Morgan. Coincidentally, The Midwest Dream Car Collection was also founded by a man named Stanley Morgan—although most of us know him as Ward. Currently, the Morgan Motor Company is located in Worcestershire, England, and employs 177 people in its factory. With a waiting list of six months to ten years, these cars are tough to acquire, which is a true mark of a great car and company.

With a real passion for grand touring and automotive heritage, the Morgan Motor Company has created cars for over 100 years. One of the company’s most prominent features is the use of handcrafted ash wood in the body frame of all its cars to date. According to the Morgan Motor Company, the ash acts “as a structure from which the exterior aluminum body panels and interior leather work are hung. Every Morgan is expertly handcrafted using three core elements: ash, aluminum and leather. By pushing the boundaries of how long-established techniques can be applied, each Morgan car celebrates traditional manufacture while embracing modern design.”

Passing from generation to generation in the Morgan family, the Morgan Motor Company has continuously provided a charming and extensive heritage in the automotive world: “The Morgan Classic Range continues to be the most popular model within the Morgan range—with models including the 4/4, the Plus 4, the Roadster and the Plus 8, which is an exhilarating cross-over between the Classic and Aero Ranges.” An iconic and interesting touch from all Morgan models is their unique styling, which matches that of a very small-frame 1930s automobile.

*The information in this document is largely provided by Morgan-Motor.co.uk. The full citation is listed below along with a link for this information and more.