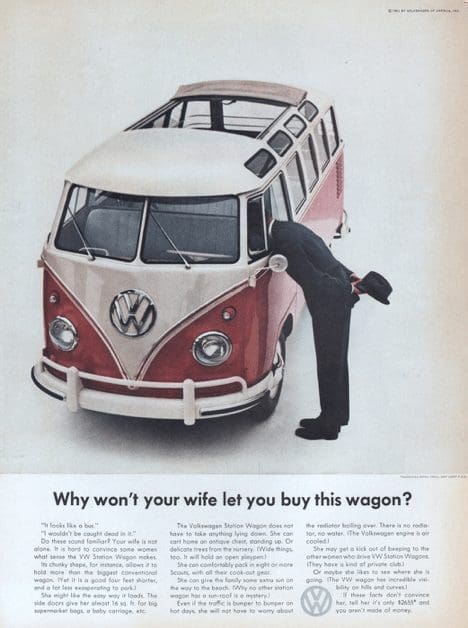 “If you can’t decide between a station wagon and a van, get both.”

The Volkswagen Type 2 or “Samba Bus” was also known as the “Microbus”. It is a small bus and the forerunner to modern cargo and passenger vans. This particular Volkswagen 23-Window Samba Bus is documented with German verification that declares it to be an extremely rare and authentic U.S.-export Model 241 turquoise/white vehicle with Como Green interior.

The history of the Samba Bus

By 1950, Volkswagen had sold only a few cars in the United States. During the post-WWII era, the company had reached a time for expansion into a new market. In response, Volkswagen produced a family bus that fit seven people.

The Samba Bus was made with family, economy, and visibility in mind. The 23 windows open the interior to the outside. Eight skylight windows and a huge retractable sunroof add to the full open-top experience of a 23-window bus. Economy came from its roots in the VW Beetle, which had great fuel efficiency out of its similar four-cylinder. The seven seats easily accommodated the whole family. With plenty of possibilities for customizable conversions, the car could go anywhere.

Several versions of the Type 2 or Microbus were available. The Kombi was an 11-window model. The Deluxe was a 15-window variation. Rarest of all, the Samba offered 23 windows. Sambas were built from 1951 to 1963; ours is from the final year of production.

Later Volkswagens meant to replace the Microbus were marketed as perfect combinations of vans and station wagons. In a 1976 advertisement, the company claimed, “The 1976 Volkswagen wagon has all the space of a van. (176 cubic feet in all.) And all the plushness of a station wagon. (Comfortable seating for seven.) It comes with a more powerful fuel-injected 2-liter engine, a fold-down rear seat and sliding door for easy loading. Independent 4-wheel suspension for a smoother ride, radial tires, and an optional automatic transmission. And the Volkswagen wagon’s got something you may not find in either a station wagon or a van. Economy.”

Powered by a date-correct and model-correct 1200 cc four-cylinder engine with a four-speed manual transmission, the bus is also equipped with a correct big-brake transaxle, VDO gauges, radio, and clock. The nut and bolt restoration from 2015 retains mostly original sheet metal, and the bus has added very few miles since its restoration. The Samba before you is one of the most pristine examples in the world and the third-most-expensive Volkswagen ever sold at Barrett-Jackson.

The scheduled production date for this Microbus was May 8, 1963. The car retains its original VIN plate, M-Code data plate, and chassis body stamp—all of which further confirm its authenticity. Every side window is a pop-out, and the bus contains a fully retractable sunroof.

The Volkswagen Samba Bus is extremely collectible. Celebrities like comedian Gabriel “Fluffy” Iglesias and numerous other collectors around the world search night and day for their perfect buses. Here is one of the most pristine examples. The restoration has brought this vehicle nearly back to factory. Because it is adored by people worldwide for its originality and uniqueness on the road, the Samba Bus will forever remain a collectors’ car.