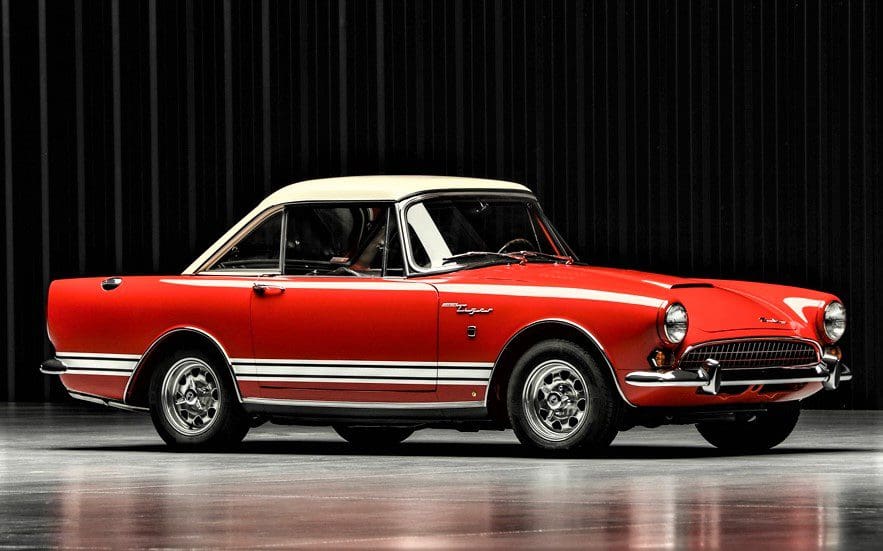 First introduced to American buyers in 1964 and launched in the United Kingdom the following year, the Sunbeam Tiger is a two-seat sports roadster that was built by the British manufacturer Rootes Group between 1964 and 1967. Based on the Sunbeam Alpine, the Tiger was the result of the Rootes Group and Carroll Shelby coming together to create what many would call a “baby Cobra”. The Sunbeam Tiger was powered by Ford’s small block 260 cubic-inch engine. In 1967 Shelby wanted to make a statement in what would become the Tiger’s last year, so he meticulously fit Ford’s 289 V-8 under the hood, resulting in an untamed and uncaged automobile known as the Tiger MK II. The Sunbeam Tiger MKII had a 0-60 time of 7.5 seconds and a top speed of 122 mph, impressive for a small 1960s sports roadster. All this fun would soon come to an end after the Rootes Group was taken over by Chrysler in 1967. Understandably Chrysler didn’t want a Ford V-8 in the Tiger and being unable to supply a V-8 that would fit in the roadster’s engine bay, decided to axe the car. Only 536 Tiger MK II’s would be built in 1967.

The Sunbeam Tiger MK II in our collection holds serial #3 of the 536 produced in its only and final year of 1967. Accurate down to the smallest detail, every component is original to this car including its matching numbers 289 V-8. The brilliant red finish with lower white stripe is the appropriate color combination to match the powerful V-8 under the hood. The car comes equipped with a removal white hard top as well as a folding black soft top for those who wish to enjoy an open-air driving experience. The twin bucket seats are finished in black leather facing an impressive array of gauges on the dash surrounded by burled wood.