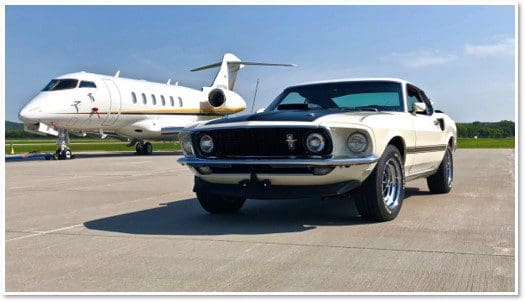 The Mach 1 was created in 1968 and released in the 1969 model year as a performance-oriented option for the Ford Mustang. Along with this new Mach 1, the Cobra Jet FE engine was introduced as a derivation from the famous GT40 engine, which had been dominating at the 24 Hours of Le Mans. This Mach 1 package was designed with a sports-roof body style that is commonly known as a fastback—not to be confused with the hardtop or convertible. The R Code’s name signifies the Ram Air induction.

Seeing resto-mod examples that are not original Mach 1s but have been converted by Ford enthusiasts to have the Mach 1 design package is common. However, this Mustang is a true original. Matte black hood treatment, hood pins, hood scoop, shaker, competition suspension, revised Goodyear Polygas tires, chrome exhaust tips, deluxe vinyl interior, rear deck spoiler, chin spoiler, and rear window louvers announce the Mach 1’s presence and set it apart from all other cars and Mustangs on the road. Although this particular Mustang has had its rear-window louvers removed, the car still sports all other Mach 1 features.

A 351W 4V was optional as was a 390-CID FE and huge 428-CID Cobra Jet 4V with or without Ram Air. The drag pack option with the modified 428 ci. Super Cobra Jet engine was also introduced. A four-speed manual was optional, and the 428SCJ added a cast-iron tail shaft in place of the regular aluminum one in the C6. A “traction lok” rear axle was optional, and the 428 CJ/SCJ included a traction lok with a 3.91 or 4.30 ratio; 31 spline axle shafts; and a nodular case.

In 1969, endurance driver Mickey Thompson took three similar Mach 1 Mustangs to the Bonneville Salt Flats for a feature in Hot Rod magazine. During that excursion, he set 295 speed and endurance records throughout a series of 500-mile and 24-hour courses. Averaging 159.556 mph for 500 miles, the standard 428 Mach 1 set a record for production cars.

Nearly 72,000 Mach 1s were produced in 1969, which was the most popular and successful year during the model’s manufacture. Ford kept the Mach 1 alive into 1970; other than the visuals, little on the car was changed. The 1970 body included dual-beam headlights; the previous inner headlights became sport lamps and recessed taillights on a black honeycomb rear panel. Side scoops behind both doors were removed. Bucket seats were revised. The main visual differences also included deep-dish sports wheel covers as well as new side and rear badging and striping.

About the Ford Mustang Lineage

The Ford Mustang is one of the most iconic muscle cars of all time. It is recognized globally as a pony car; such cars have always been produced with V-8s. The Mustang is an American car manufactured by Ford and was originally based on the platform of the second-generation Ford Falcon, which was a compact. The original 1962 Ford Mustang I two-seater concept car evolved into the 1963 Mustang II four-seater concept car, which Ford used to pretest the public’s interest in the first production Mustang. The 1963 Mustang II concept car was designed with a variation of the production model’s front and rear ends and with a roof that was 2.7 inches shorter. Introduced early on April 17, 1964—16 days after the Plymouth Barracuda—and thus dubbed the “1964 ½” by fans, the 1965 Mustang was the automaker’s most successful launch since the Model A. Afterward, the Mustang underwent several transformations and is currently in its sixth generation.

The Ford Mustang created the pony-car class of American muscle cars—affordable muscular coupes with extended hoods and short rear decks—and gave rise to rivals such as the Pontiac Firebird, AMC Javelin, Chevrolet Camaro, Chrysler’s Plymouth Barracuda, and the second-generation Dodge Challenger. The Mustang is also credited with inspiring the designs of coupes such as the Toyota Celica and Ford Capri, which were imported to the United States. As of August 2018, over 10 million Mustangs have been produced in the nation.