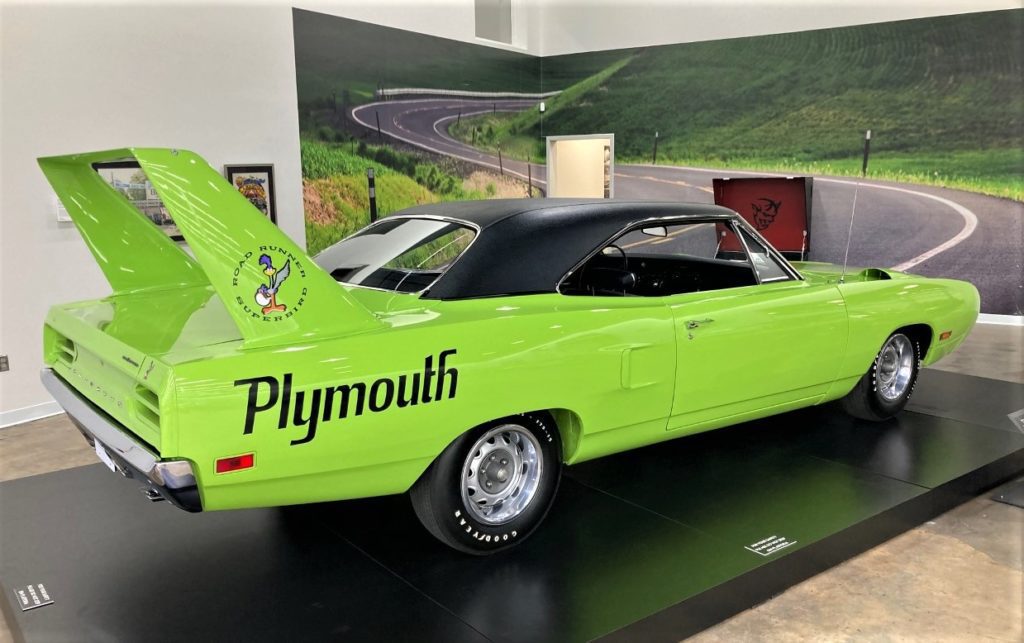 The Plymouth Superbird is an extremely modified version of the Plymouth Road Runner. Known for its Road Runner decals and “beep beep!” horn sound, the Superbird was Plymouth’s go-to stock car and ultimately what won Richard Petty eight races in the 1970 NASCAR season.

The Superbird in Our Collection

The Superbird on display in The Midwest Dream Car Collection is one of only 408 that were produced with the 440-CID six-barrel engine and column-mounted automatic transmission. The car was a North Carolina barn find with 36,000 original miles, and it received a full restoration in 2017.

The vehicle retains the original matching-numbers engine and transmission; all of the original sheet metal, which is clean and rust free; and the original metal nose cone. The straight body has been finished in factory-correct high-impact Limelight Green over a new interior that features a factory AM/FM radio and Rallye gauges with a tachometer. The weatherstripping, window seals, vinyl top, and chrome bumper were all replaced during the restoration. Other new parts include an alternator, wiper motor, and master cylinder.

The air cleaner, “beep beep!” horn, and hood insulation were restored, and the jambs, motor, and trunk compartments were painted. The trunk includes a bumper jack for the rear, scissor jack for the front, and Polyglas spare tire on a matching Rallye wheel. Detailed restoration documentation, photos, and the original Broadcast Sheet are included with the car.

Sitting behind that beautiful nose cone is a 440 Six Barrel (Six Pack for Dodge). For those reading who do not know about these cars, that means that this Superbird is carbureted by three two-barrel carburetors tuned in sync to create a six-barrel engine. The engine puts out 390 horsepower and 490 foot-pounds of torque. With a 0-to-60 time of 5.5 seconds, this Superbird can really move! By today’s standards, 5.5 seconds for 0 to 60 mph isn’t great; however, frankly, it’s still quite decent! A 3,800-pound car that can move that fast is impressive, not to mention its well-known capability of high top speeds.

The Rest of the Story

In the mid-1960s Dodge was getting beaten by Ford in NASCAR races time after time. It wasn’t until the Chrysler Corporation, who owned Dodge and Plymouth, decided to take drastic measures in their race against the famed and successful Ford Motor Company. In 1968, orders were sent down from the executives at Chrysler to start winning races at any and all costs.

It is said that Chrysler’s missile division of the 1960s is where the Superbird and Daytona were actually born. The missile division was actually used by the United States government during the cold war as a missile producer under the code name “Operation Paperclip.” Aerodynamics which were studied by Chrysler’s engineers were implemented into their NASCAR team for the 1969 and 1970 seasons. The results were legendary and something that changed the way we thought about stock car racing.

In 1969 the Dodge Daytona became the first NASCAR to break the 200-mile-per-hour speed barrier at 204 mph. This was kept secret until the Daytona made a public debut in September of 1969. With an easy win at the Alabama International Motor Speedway in Talladega, Alabama, the Daytona became an overnight hit among NASCAR and racing fans alike. It wasn’t until the 1970 season that a near identical car under Dodge’s sister company, Plymouth, was introduced as the Superbird.

To increase downforce on the race track in each of these cars, the massive and iconic rear wing was attached to the back of both the Daytona and Superbird. It became a wonder among NASCAR fans what the reason was for such a tall wing, many speculated on its actual measurements and why that decision was made. It wasn’t until the late 90s that a retired engineer from the project falsely claimed that the wing height was designed for trunk clearance.

It has since been discovered that this height was determined because of aerodynamic flow over the car. Air that moved directly over the car’s body created a swirling pattern and as a result, this tall wing was above the height of the roof and could directly catch direct and smooth air from above.

The fender scoops directly above the front wheels were actually functional in stock car racing, but road-going versions of the car featured a fake scoop only for cosmetic proposes. The NASCAR Superbirds were able to reduce air pressure within the fenders and allow for larger wheels with a reduced chassis height.

The added aerodynamic features like the protruding nose cone, fender scoops, and rear wing are what made the Superbird stand out among the crowd. Though this was intended to increase speed around the track and ultimately what won it so many races, the cars added features were not useful under 60 mph.

The standard Road Runner for the time period could beat a Superbird in acceleration tests to 60 miles per hour and in the quarter mile because it weighed less.

The Superbird before you was ultimately made because of new NASCAR homologation requirements for 1970. NASCAR changed its criteria for vehicles in that for every stock car model raced, there had to be one car built for every two of the manufacturers’ dealers. Plymouth therefore had to build 1,920 examples versus the standard 500 from the year before.

Each NASCAR Superbird was equipped with a top-of-the-line 426-CID Hemi engine and a pair of four-barrel Carter AFB carburetors (2×4 bbl) that could produce 425 horsepower and accelerate from 0 to 60 mph (0 to 97 km/h) in 5.5 seconds [4]. Because the 440 was less expensive to produce, Plymouth homologated the street version of the 426 Hemi engine used in competition by manufacturing the minimum number required (135 in total) [5].

Increasingly tough emission standards for the time, insurance rate increases for sports cars, and the ultimate NASCAR ban on aero cars like the Superbird and Daytona, resulted in 1970 being the only year of the Superbird’s production. As a result, the car has become extremely valuable in the collector car market today.

In order to entice Richard Petty back to the Plymouth NASCAR team, the Superbird was used as the ultimate bait. Petty (stock car No. 43) left the Plymouth team in 1968 and began to race for their direct rival and highest contender – Ford.

Petty won eight races in the 1970 season and placed very high in many other races with his new Superbird. It wasn’t until the 1970 season when NASCAR limited aerodynamic cars to have a smaller cubic-inch engine with a maximum of 305. The cars also had to add extra weight to make them a more even competitor.

This added weight and smaller engine made it impossible for teams to use the new aerodynamic cars because they became much slower. This adjustment was made because racing speeds were exceeding the safety equipment and tires of the time period. It was the beginning of the rules that started to slow NASCAR back down and make stock cars not-so-stock anymore.

“Petty’s Superbird appears as a key character in the 2006 Pixar film Cars, with Petty as the voice of seven-time champion Strip “The King” Weathers. The racing sponsor’s branding in the film exactly matches the Superbird’s paint as ‘Dinoco blue.’” [4]