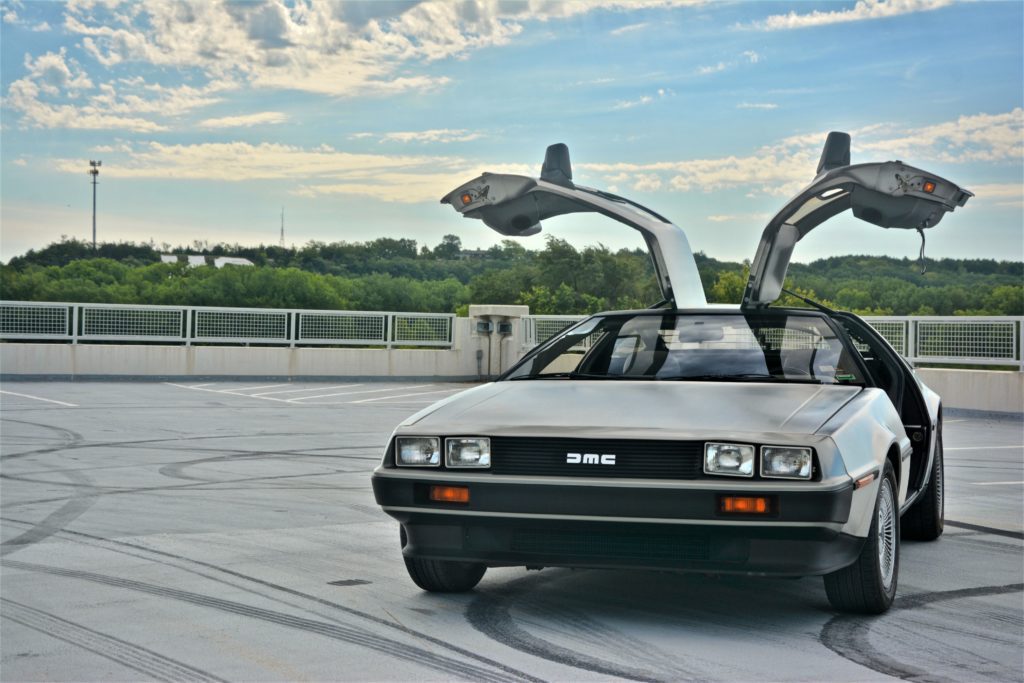 The DeLorean DMC-12 was produced by the DeLorean Motor Company for 1981 to 1983. Because it’s the only car the company ever produced, it’s commonly referred to as just “the DeLorean.”

This car is featured with the same external specifications as every other DeLorean made in the 3-year period (with the exception of two gold vehicles). The gull wings, stainless steel, and wedge-shape design are stand-out attributes recognizable to people worldwide.

The car’s story starts in October of 1976, when the first prototype was unveiled by John DeLorean, a former division head and engineer for GM, under the Pontiac name. The prototype began with a mid-engine design by American automotive engineer William T. Collins, which eventually turned into the rear-engine design featured in the mass market.

DeLorean, famous for his design work on the Pontiac GTO, split from GM in 1973 and started work on the soon-to-be famous DMC-12. He successfully asked many celebrities in Hollywood, like Johnny Carson and Sammy Davis Junior, to invest in his new company.

The new project was started in the unusual location of Dunmurry, Northern Ireland, near Belfast. Construction broke ground in 1978, but unforeseen engineering problems delayed production until 1981. The car was expected to sell for around $12,000, not a bad price for 1981, but ended up near $25,000 ($75,000 in today’s money). Inexperienced workers had been given high-end equipment and not enough training, which resulted in an early bankruptcy for DeLorean in 1982. Shortly after, John DeLorean was also arrested on drug-trafficking charges. He was later found not guilty, but regardless, the DeLorean Company had already fallen into insolvency, and John’s reputation as a businessman was ruined in the public eye.

The DMC-12’s gullwing doors might be its most distinctive feature. On problem in building them was the windows: a shorter door wall meant that only half-window portions could be retractable, much like the Lamborghini Countach of the same period.

The engine is a PRV (Peugot-Renault-Volvo) -derived 2.85-liter V-6 producing an underwhelming 130 horsepower—another downfall for the DeLorean in the sports car and exotic car markets. The V-6 was paired with a 4-speed manual transmission, a four-wheel independent suspension, coil springs, and shock absorbers.

The body panels achieve their color from 100% food-grade brushed stainless steel. Even the owner’s manual says the best way to clean it is with a Scotch-Brite pad and gasoline—a dangerous and unusual spot-cleaning method. The car’s shape was created by the legendary Gioretto Giugiaro, designer of the BMW M1, the Lotus Esprit, the Yugo, and the Lexus GS.

The car’s top speed is a mere 110 mph, and it will do zero to sixty in 8.8 seconds. The DeLorean fell short of expectations in performance. However, its shocking appearance and bold styling, and its famous feature as the time machine in Back to the Future starring Michael J. Fox, eventually brought it to the collector-car level it had hoped to reach during production.

Today, the DeLorean DMC-12 is an icon in the car world—something that almost everyone can recognize and differentiate in the world of cars. All DeLoreans offered only a single option: automatic transmission. And all the cars came with brushed stainless-steel bodies, excepting just three that came gold-plated from the factory.

The unique DeLorean will always hold a place in automotive history as one of the most interesting cars ever made (if Back to the Future didn’t guarantee that anyway).