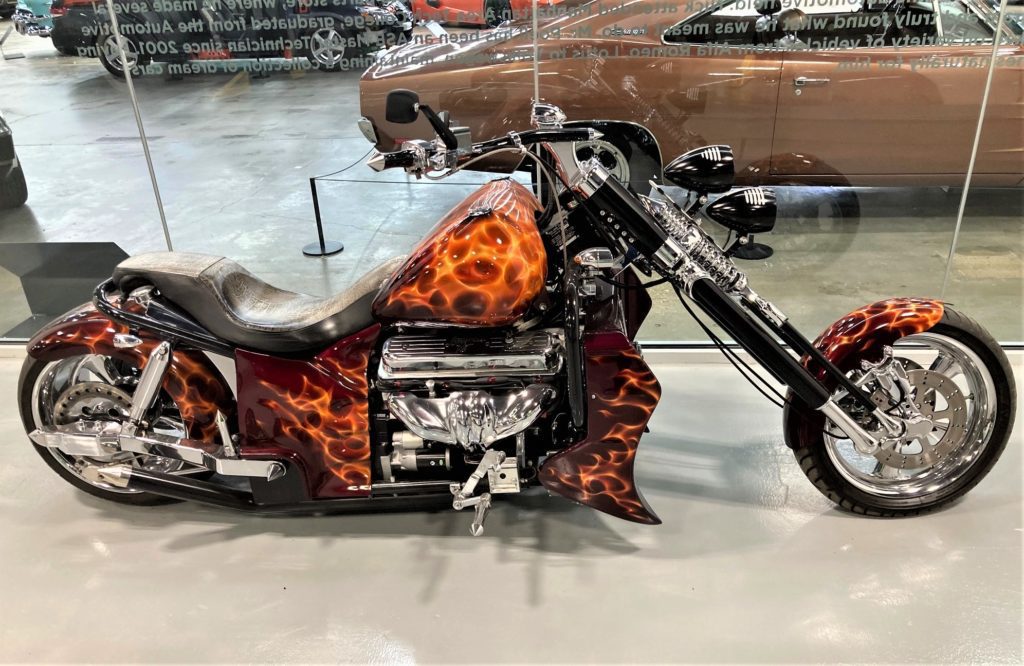 “Custom motorcycle painting, like tattoos, is personal as bikers express themselves”
—Rick Barrett

Boss Hoss Cycles is an American motorcycle manufacturer founded by Monte Warne in 1990 and based in Dyersburg, Tennessee. The company builds special high-performance motorcycles and trikes equipped with V8 engines, produced by Chevrolet and ranging in size from 350 to 502 CID and equipped with semi-automatic transmissions, making them by far the most powerful motorcycles in the world. By the mid-1990s, Boss Hoss was selling 300 vehicles per year. As of 2006, they’ve sold more than 4,000.

Boss Hoss bikes and trikes are noted not just for their enormous power and size but for their low vibration, especially compared to that of V-twin or single-cylinder motorcycles. The damping effect of the unusually great mass, the relatively high number of engine cylinders, and the very tall gears of the semi-automatic transmission combine to provide what’s often described as “vibration-free acceleration.”

About this Boss Hoss

It also features an unbelievable custom airbrush paint job depicting a lion on the gas tank and flames engulfing the rest of the panels. A paw tears up the rear fender, while the front shows off the big “V8” branding. A faux alligator-skin seat and extremely sharp chrome pieces round out the bike for a thrilling flare.

This bike is one of the largest on the road and a terror to ride. All the power from the massive V8 engine torques to one side as you accelerate from zero. Maintaining balance and handling this beast are not for the faint of heart.

About “choppers” *The information in this document is provided by MotorcycleUSA.com. The full citation is listed below along with a link for this information and more. A chopper is a type of custom motorcycle that emerged in California in the late 1950s. They can be built from an original motorcycle that’s been modified (“chopped”) or from scratch. Choppers may be the most extreme of custom styles, often using radically modified steering angles and lengthened forks for a stretched-out appearance. Some other characteristic features are long front ends often coupled with an increased rake angle, hard-tail frames (lacking rear suspension), very tall “ape hanger” or very short “drag” handlebars, lengthened or stretched frames, and larger-than-stock front wheels. The “sissy bar,” a set of tubes connecting the rear fender with the frame and often extended several feet high, is a signature feature on many choppers. The desire to make motorcycles lighter and faster helped fuel the chopper movement. It started not long after World War II. Many returning GIs had learned mechanical skills in the service and been exposed to the small, fast bikes coming out of Europe at the time. But a lot of big, heavy, utility-based motorcycles had been made for the war effort, meaning there was a surplus of motorcycle frames, engines, and parts. The returning soldiers started stripping bikes down to their essentials. Front fenders were removed. Rear fenders were bobbed or stripped off too. Fuel tanks shrank, and exhaust systems were replaced with straight pipes. Smaller padded seats replaced wide, leather, spring-supported seats. These “chopped” up bikes were also called “bobbers,” and the thrill of riding them fast filled the need for adrenaline that many soldiers still felt. In the 1960s, chop shops and custom motorcycle builders started springing up everywhere. The original chopper movement was taken even further, a builders started chopping down and lowering the frames too; this was when the term “chopper” appeared. About the same time, motorcycle rakes also started to stretch. Even though a heavy rake angle sacrificed low-speed handling and cornering ability, it made the bikes track faster and truer at speed. Springer and girder forks became extremely popular. Then, in 1969, the movie Easy Rider was released, with its iconic red, white, and blue chopper, the “Captain America,” and the style was permanently embedded in American motorcycling lore. “Choppers” saw a resurgence in the 1990s, but with a new interpretation. The motorcycles still sported a heavy rake angle and modified frames, but the rear tires started pushing out to ultra-wide dimensions, rear fenders came back to serve as canvases for high-dollar paint, and the uniqueness of individual builds gave way to custom-production motorcycles from small manufacturers. The old adage “Less is more” remained a way of life for independent custom builders like Indian Larry and Chica, but the term “chopper” began to take on new connotations because of the rising popularity of shows like the Discovery Channel’s Biker Build-Off and TLC’s American Chopper.

This Information and more can be found at: