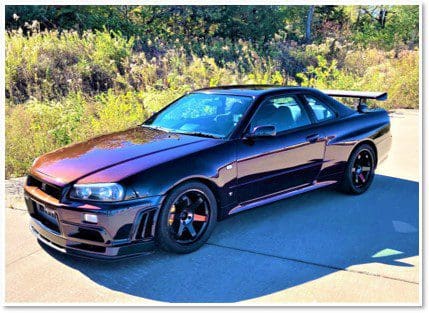 After a 16-year hiatus, the GT-R name was revived in 1989 as the BNR32 (“R32”) Skyline GT-R. Group A specification versions of the R32 GT-R were used to win the Japanese Touring Car Championship for four years in a row. The R32 GT-R also had success in the Australian Touring Car Championship, with Jim Richards using it to win the championship in 1991 and Mark Skaife doing the same in 1992, until a regulation change excluded the GT-R in 1993. The technology and performance of the R32 GT-R prompted the Australian motoring publication Wheels to nickname the GT-R “Godzilla” in its July 1989 edition.Wheels then carried the name through all the generations of Skyline GT-Rs, most notably the R34 GT-R, which they nicknamed “Godzilla Returns”, and described as “The best handling car we have ever driven” and in their tests covered a quarter of a mile in 12.7 seconds from a standing start time and accelerated from 0–62 mph) in 4.4 seconds. It was one of the fastest accelerating production vehicles at the time.

The Skyline GT-R became the flagship of Nissan performance, showcasing many advanced technologies including the ATTESA E-TS All-wheel drive system and the Super-HICAS four-wheel steering. Today, the car is popular for import drag racing, circuit track, time attack and events hosted by tuning magazines. Production of the Skyline GT-R ended in August 2002. The car was replaced by the R35 GT-R, an all-new vehicle based on the V36 Skyline platform. Although visibly different, the two vehicles share similar design features and are manufactured in the same factory.

The Skyline GT-R was never manufactured outside Japan, and the sole export markets were Hong Kong, Singapore, Australia and New Zealand, in 1991, and the UK (in 1997, due to the Single Vehicle Approval scheme) as used Japanese imports.

Despite this, the car has become an iconic sports car as a Grey import vehicle, including in countries from the Western World (mainly the United Kingdom, Australia, New Zealand, South Africa, Ireland, Canada, and the United States). It has become notable through pop culture such as The Fast and the Furious, Initial D, Shakotan Boogie, Wangan Midnight, Need for Speed, Forza, Driving Emotion Type-S, and Gran Turismo.

The car was named at the time by BBC’s Top Gear as the only true Japanese contribution in the line of supercars, and by Jeremy Clarkson as one of the best cars in the world.

The GF-BNR34 (R34) Skyline GT-R, GT-R V·Spec and GT-R V·Spec N1 models were introduced in January 1999. The R34 GT-R was shorter (from front to rear), and the front overhang was reduced as compared to its predecessor. The valve covers were painted glossy red as opposed to black in previous models.

A new feature on the R34 GT-R was the 5.8″ LCD multifunction display on the center of the dashboard, which shows seven different live readings of engine and vehicle statistics such as turbocharger pressure (1.2 bar max), oil and water temperature, among others. The GT-R V·Spec model added two extra features to the display: intake and exhaust gas temperatures. Nismo Multi-function Displays (MFD) could be bought at an extra cost, they included a lap timer, G-Force meter and an increase in boost pressure measurement to 2 bar. The R34 GT-R was made shorter in response to customer concerns who thought the R33 was too bulky.

Like the R33, the new R34 GT-R V·Spec (Victory Specification) models come equipped with the ATTESA E-TS Pro system and an Active LSD at the rear, while standard GT-R models come with the non-Pro system and a conventional mechanical differential. The V·Spec model also had firmer suspension and lower ground clearance, thanks to front and side splitters, as well as a rear carbon fiber air diffuser, designed to keep air flowing smoothly under the car.

At the time of the R34’s introduction, like the R32 and R33, Nissan introduced an R34 V·Spec N1 model. The R34 V·Spec N1 was equipped similar to the R32 and R33 N1 models – a homologation special. It was sold without air conditioning, audio equipment, rear wiper, or boot lining, but ABS remained. The new R34 N1 was also given the new R34 N1 engine. Only 38 known R34 V·Spec N1 models were produced from the factory, 12 of which Nismo used for Super Taikyu racing. The rest were sold to various customers, mostly racing teams and tuning garages.

The V·Spec version was also imported into the UK with a number of modifications carried out on these 80 cars These included 3 additional oil coolers, revised ECU map, full Connolly leather interior, underbody diffusers, stiffer suspension, active rear limited slip differential, extra display feature on the in car display. In addition to the UK, 10 were sold to Hong Kong and Singapore, and 5 to New Zealand although with different changes for their respective markets.

The GT-R V-Spec at the Midwest Dream Car Collection is one of only 282 made and finished in the exclusive Midnight Purple II paint scheme and one of twelve legally imported into the United States under a special Show and Display certificate issued by the National Highway Traffic Safety Administration (NHTSA). The 2.6 liter inline six engine features twin turbo chargers, four valves per cylinder, and a unique enclosed individual throttle body system. Due to the Japanese automakers “Gentleman’s Agreement” the engine was advertised at only 280 horsepower, though actual power figures were closer to 320. Designed by Kozo Watanabe, the R34 features the culmination of many of Nissan’s engineering marvels which shocked the automotive world beginning in 1989. All Wheel Drive, All Wheel Steering, a Multi-Functional Display, and the aggressive styling cemented the Nissan Skyline GT-R within the hierarchy of JDM supremacy.