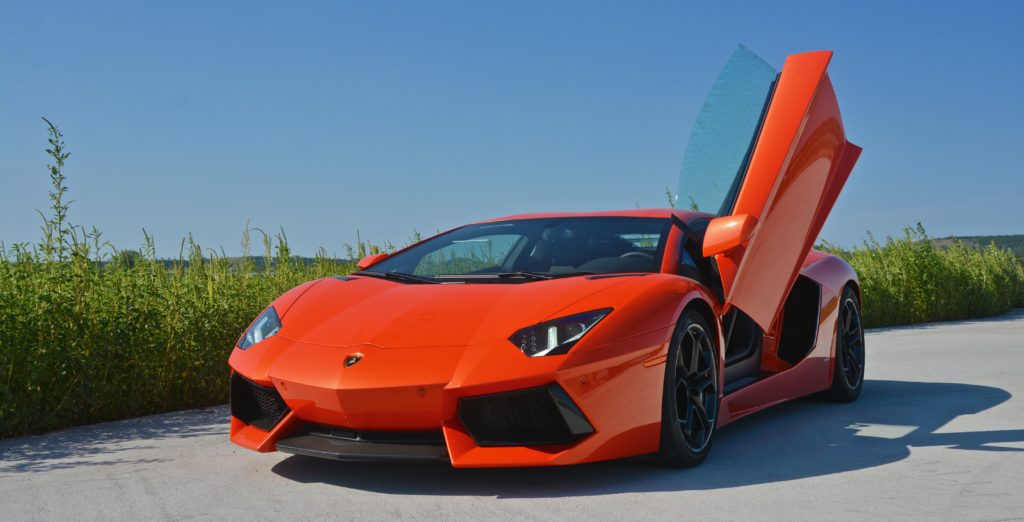 The Lamborghini Aventador is a mid-engine supercar offered by the Italy-based manufacturer, Lamborghini. The Aventador was unveiled at the 2011 Geneva Motor Show as the new V12 flagship model for the Lamborghini lineup. This particular car has had one previous owner, who happens to be the legendary Italian-American racecar driver, Mario Andretti.

Lamborghini had humble beginnings as a tractor company prior to 1963. Ferruccio Lamborghini, founder of the company and not-so-proud owner of a Ferrari, was pressed to find a better sports car manufacturer as he continuously ran into issues with his current sports car. Complaining to Ferrari led him to a frustrating end and sparked a fire that would begin his career in car manufacturing. He would make a car that was better than Ferrari in every way, something that could only be considered the best of the best.

His first-ever car was the Lamborghini 350 GT, which struggled to gain traction (figuratively) in the sports car market. After revision and improved planning, the Miura was unveiled in 1966 and it was a colossal success. Still considered one of the most beautiful cars ever made, the Miura will hold a legacy of its own for centuries to come. Followed by equally revered mid-engine V12 flagships in the Countach, Diablo, Murcielago, and finally, the Aventador.

The Aventador is denoted as the LP700-4, which stands for Longitudinal Postiore (as the engine is in line with the body of the car), 700 horsepower, and the four stands for all-wheel drive. The V12 is a 6.5 liter, naturally aspirated monster that roars like “an angry lion.”

A mobile rear wing, paddle-shift gearbox, and three driving-selection modes – the combination that brings the driver into an experience of a lifetime. Upon accelerating the rear wing deploys, while driving-selection modes can be selected for quicker shifts, harder suspension, and more precise steering. Connected through an automatic and paddle-shift single-clutch transmission, the car is a fighter jet and F1 racecar for the everyday road.

Styling for the Aventador is nothing less than ridiculous. As is common among Lamborghinis of the past, the Aventador turns heads from even the most unsuspecting. Scissor-style doors add to the occasion, lifting up for curbside door clearance and a styling cue which is rooted in the days of the Countach. The Aventador gets its name from a famous Spanish fighting bull, as do other Lamborghini models of past and present, that is also the inspiration behind their fighting bull logo.

If everything seems under control, you’re just not going fast enough.— A quote from Mario Andretti (which we will assume came from his experience in this very Lamborghini). Single-clutch shifts are achieved in 50 milliseconds; the all-wheel drive system is a Haldex system from Sweden, which is top-of-the-line technology for traction. The power to weight ratio is 5.45 pounds per horsepower.

This particular Aventador is featured in Arancio Argos (orange) with all of the carbon fiber options. It also has the black wheels and Lamborghini brake calipers. The car has been retrofitted with a police radar detector and after-market exhaust.

A lengthy career in racing and United States Driver of the Year across three decades, Mario Andretti became synonymous with speed and a hero around the world. Before you is Mario’s personal Lamborghini Aventador; he put 6,000 miles on it before signing: “Pls take care of my car! – Mario Andretti” under its front bonnet. Mario is now 78 years old, living in New York. Many assume he sold this car because it is a little too exotic and tough to manage, but that is not the case. Mario has recently acquired the new Aventador S, which surely brings the race car driver just as many smiles.

Mario Andretti is an Italian-born racing car driver who has competed in numerous racing series around the world. He is currently a resident of the United States and one of the most legendary drivers in history.