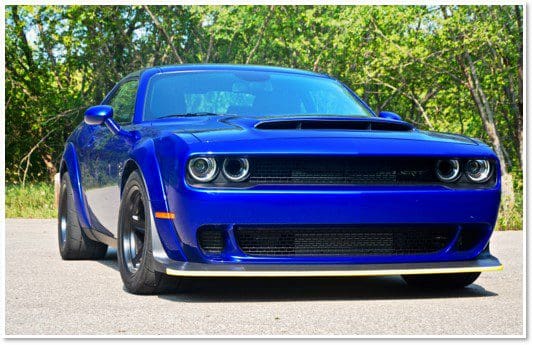 This information in this document is provided by K.C. Colwell of CarandDriver.com. The full citation is listed below along with a link for this information and more.

“Dodge’s latest monster muscle car is a mega-power drag-race special, and its name is Demon. Standard Demons come with a supercharged 6.2-liter V-8 that cranks out 808 hp, but owners can increase that to 840 hp with the Demon Crate package. So equipped, Dodge claims that the Demon will demolish the quarter-mile in 9.65 seconds at 140 mph. Weight-saving measures have been taken wherever possible, and even passenger seats are optional. The Demon is a rare piece: the U.S. will only get 3000 units.” (Colwell)

“The lawn isn’t getting mowed. Floors aren’t being mopped. Dishes remain piled up. We are zeroed in on tackling the most powerful production car America has ever built. We’re talking about the 2018 Dodge Challenger SRT Demon. Most of its steamy details were divulged over a 12-week roll-out leading up to the New York auto show this past April. But to recap: Demons come off the assembly line sporting a wide-body kit, a drag-strip-tuned adaptive suspension, and an engine that makes 808 horsepower. This supercharged 6.2-liter V-8 is an evolution of the Hellcat’s 707-pony Hemi but with beefed-up internals and a larger, 2.7-liter rotary-screw blower (up from 2.4 liters) from supplier IHI, tuned to make 14.5 pounds of boost. The car comes on four drag radials, but the eight-speed ZF 8HP automatic turns only the rear wheels. Speaking of transmissions, this one features the first transmission brake on a production car—more on that in a bit—as well as a few other drag-racing tricks.”

“After plunking down $86,090, buyers can fit a bunch of extra bits on their Demons to get the power figure up to 840 horsepower when burning 100-octane gasoline. All the add-ons, including skinny front wheels, can be had for just one dollar as part of what Dodge calls the Demon Crate.”

“It’s not a GT350R or a 1LE,” declared Tim Kuniskis, head of the Dodge, SRT, Chrysler, and Fiat passenger-car brands in North America. No kidding. This is a car built to run 1320 feet at a time. But you can legally drive it to the strip and back, too. Unfortunately, we would not be driving a single inch on public roads. We drove the Demon exactly 19,641 feet, or 3.7 miles, in the course of making three passes at Lucas Oil Raceway.”

“Such a precise distance is known because we brought along a VBOX data logger in the hope of getting a better idea of just how quick the Demon is. But with such little exposure, we couldn’t clock a time we feel comfortable publicizing.

It isn’t that we don’t believe SRT’s claim that a Demon ran a 9.65-second quarter-mile. It’s just that we believe those circumstances were outside the typical conditions a weekend warrior might find. You know, like a perfectly prepared launch box at sea level and a warm track but cool and dry ambient air, as well as a little bit of luck. We test in street conditions, so when we do get around to formally testing a Demon, it will not be quite as quick as that. We expect the car to run a quarter-mile in the low-10-second range. Knock off a few tenths if it’s fitted with the skinny front wheels and tires and is running on 100-octane fuel. The zero-to-60-mph time will be darn close to pipping the Porsche 918 Spyder’s 2.2-second record.”

“Before they cut us loose on the strip, SRT engineers walked us through the arduous process of getting the Demon ready for a pass. A graph in the central touchscreen can tell you when the engine is cool enough for an optimal pass. The After-Run Chiller circulates coolant after shutdown so it can continue cooling when parked. With thermal criteria satisfied, get the car into Drag mode by double tapping the SRT mode button, then pressing the high-output button to get the full 840 horses if you’re running high-test fuel. Drag mode disables the cabin A/C, routing its cooling power to the SRT Power Chiller, a device that can drop the intake temperature by as much as 18 degrees by cooling the liquid in the liquid-to-air intercooler circuit.”

“What happens next is the vehicular equivalent of a Mortal Kombat finishing move. Hit all the right buttons in the right sequence, and you will destroy all other production cars. Get it wrong and the car just kind of shakes a little and barely moves.”

“Creep up to the burnout box and activate line lock to do a four-to-five-second burnout. This involves holding the OK button on the left side of the steering wheel. Roll up to the staging lights and ready the TransBrake, which is always active—and available only—in Drag mode. Its engagement requires both feet and both hands. Mash the brake pedal with your left foot, and pull and hold both shifter paddles. To remove any lash in the driveline and to preload the driveshaft and trans with torque, inch up to the line a bit while still holding the brakes. Then release one of the paddles and the brake pedal. Now the transmission is essentially in first and second gears simultaneously and the car will not move unless you rev past 2350 rpm, the system limit. Easier said than done with a light-switch throttle.

At this point the TransBrake is still engaged, and the only thing holding the car in place is one of your hands—an odd feeling. The exhaust note is odd here, too. SRT calls it Torque Reserve, but it is effectively a two-step ignition. Think of it as an anti-lag system, only it is happening on the intake side and not downstream in the exhaust.”

“With the Demon set and the equivalent of “up, up, down, down, left, right, left, right, B, A” entered, Torque Reserve injects fuel into some cylinders but keeps all the valves moving—it’s essentially cylinder deactivation to allow the supercharger to build maximum boost without the engine making maximum power.”

“Hold the revs at about 1700 rpm and simultaneously let go of the paddle and bury the accelerator. The first launch is downright shocking. If you want to simulate the sensation of a 1.80-g launch—the peak acceleration that Dodge claims—have a friend punch you square in the sternum an instant before you jump off a building. This car hits that hard out of the hole, and although gravity gets you only a little more than halfway to 1.80 g, the sensation will be close enough.”

“It is easy either to bog the engine or light up the rear tires. Both scenarios are suboptimal. Get it right, which we didn’t achieve in our three turns behind the wheel, and the Demon will lift its front tires off the ground for a few feet.

For the past six months, we’ve been eagerly awaiting the chance to drive this car. We’re going to have to wait a little while longer to get the full experience. We can say this for sure, though: Even if you trailer this car to a drag strip, it won’t disappoint.” (Colwell)

A note from the Curator:

In my time with the Dodge Demon in the summer of 2018, I found it to be one of the scariest, but most pleasant cars I had ever driven. I had the car for about two weeks for the purpose of gaining 500 miles to unlock past the 800-horsepower limit.

Although the car looks like a slightly wider and more intimidating Challenger, there is not much to set it apart from its lower-horsepower sister – Other than when you push the pedal to the floor and the grumble of the engine turns to a roar and the supercharger whines like an angry cat.

Unfortunately, the car is so unbelievably fast, and the stock tires are so slick, there is no traction to gain so it becomes nearly impossible to feel the Demon’s full acceleration. However, if you give it a good 30-mph start and floor it until you reach 60, about 1 second later, you are sure to feel some of the most intense acceleration of your life.

The most impressive thing about the car is how much space it has inside, how soft the suspension feels, and how comfortable you are behind the wheel. You can drive it just like any other every-day car, clear road bumps and see with clear visibility, yet with a light press of the throttle you are immediately thrown back in your seat and projected forward faster than the speed of light.