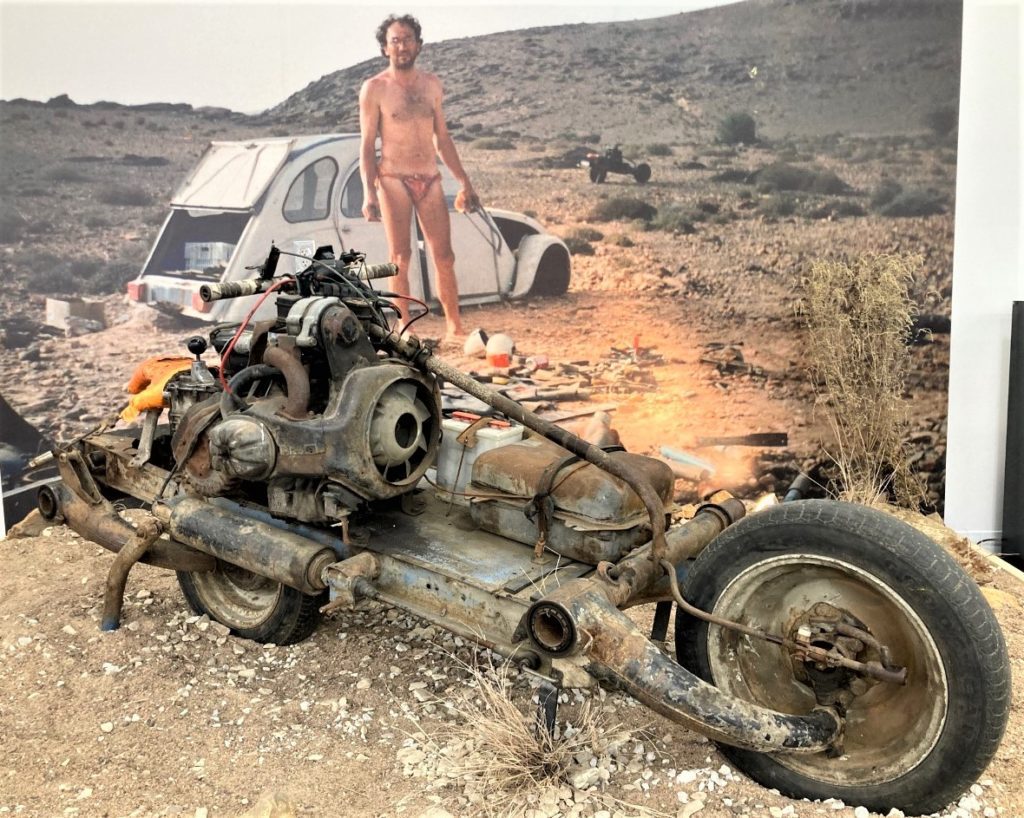 You might be wondering what a museum full of beautiful cars is doing displaying the rusty creation before you. We don’t blame you. But when you read the story, you’ll understand why it deserves to be parked in the midst of such prestigious cars.

The story behind this bike…

In 1993, 43-year-old Frenchman Emile Leray decided to take a road trip in his Citroën 2CV car from the city of Tan-Tan to Zagora, Morocco. When he arrived at Tilemsen, the border patrol stopped him and informed him that because of civil unrest down the road, he would need to return to Tan-Tan immediately. They also asked if he would mind taking a soldier with him. Not wanting to do so, he fled the police and pretended to head back to Tan-Tan. After a few kilometers, though, he veered off the road to cut through the Moroccan desert, driving much faster than the car could handle in the conditions. He soon hit a large rock, breaking the front axle and one control arm and destroying the chassis.

Miles from civilization and with only a limited supply of food and water, Emile knew that he wouldn’t survive if he didn’t take drastic measures. After determining that the car couldn’t be repaired well enough to run, he decided to turn its remains into a motorcycle. With only a few tools and no welding capabilities, though, he would need to assemble everything using the nuts, bolts, and screws he took from the car.

First, he removed the car from the frame. This way, the body could provide shelter from the harsh elements. Emile then shortened the frame to make a better chassis and added two of the car’s wheels. He also installed a suspension, engine, transmission, fuel tank, throttle, and ignition. Then he fashioned a comfortable seat from part of the back bumper, padding it with orange duct tape. To supply power to the rear wheel, he needed to completely reconfigured the driveline, which meant that for the bike to move forward, the transmission had to be shifted into reverse. After this, Emile installed the battery and rigged an on/off switch for the ignition. The final touch was hanging the license plate from the Citroen on the back. Once his makeshift motorbike was fully assembled and operating, all he needed to do was master riding it.

After 12 days and 11 nights in the desert, Emile was ready to go back to civilization. He gathered up his possessions, fashioned some goggles out of rubber from the car seat, and headed out. Then he stopped: Who would ever believe he’d done this? Emile remembered that he had a camera in the car, so he took some photos, including several of himself using a string connected to a selfie button he improvised on the camera. Amazing!

Emile then left the desert for Tan-Tan. When he reached civilization, he was again greeted by the police, but this time he was relieved—that is, until they issued him a hefty fine of 450 Euros. You see, the license plate he’d attached to his motorbike didn’t conform to the specifications of the Citroen 2CV!

This is the actual motorbike that Emile assembled during his 12 days in the desert. From the Moroccan Sahara Desert to the Flint Hills of Manhattan, Kansas, the Midwest Dream Car Collection is pleased to showcase this extraordinary motorbike for your enjoyment.